Who Done It? - The Mystery of Tanner: The Truth Revealed - Part Two 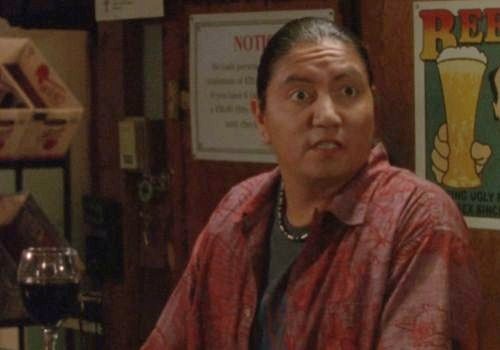 Paul, booze slinger at The Dog River Hotel, has had many an opertunity to woo young Wanda Dollard. In fact this photograph provides excellent evidence as to his possible responsiblity for child support back payments.
This image was taken just seconds after he offered Wanda her usual and she replied "No thanks Paul, I'm designated driver for this young fella in my Winnebago if you know what I mean!"
Initially, Paul thought to himself, "Wanda doesn't drive a Winnebago?" He gave it a moment and then, well, just look at his face. Is he remembering an evenings romance in the corn field after a box of wine (that was nearly a box of ketchup)?
All we need to find out is if Tanner has a decent ponytail and we could have the answer to all our questions
HANK YARBO 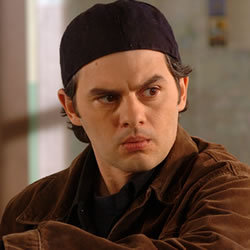 Don't be so daft.
----------
So there we have it people. Are we any closer to the truth. Will the indentity of the Tanner Daddy be revealed. At this point, do we even care?
Of course we do. More suspects will be rounded up shortly at Corner Gas Fan Corner. Until then please feel free to post your own theories in the comments section below or send them to me at the addresses available on my contacts page.
----------
* Please see Corner Gas Season 1, Episode 3 - Pilates Twist if you have no idea what I am on about. All the above is based on this one episode.
** Try saying Win over Wanda ten times quickly.
Win over Wanda is not - as much as I would like it to be the name of a Beach Boys song
*** No one ever said that any of this wouldn't be anything but tenuous!
Posted by Ian Richards