I was sitting in my living room a few weeks ago, watching the dog watching dogs on the television. I was disappointed that the programme wasn't about dogs that watch dogs on telly. That way the whole situation would be like one of those clever photos of the same image that seem to go on into the distance forever. It was one of those slow Sunday afternoons where you find yourself on the sofa wondering how the bottom of your socks end up on the top of your foot without any known provocation from yourself but have somehow been coerced there by some unseen force. All of a sudden great news and glad tidings arrived from Instagram to liven up the weekend proceedings. The Buttpod is coming! Now, being that I haven't posted for a little while, The Buttpod is here!! 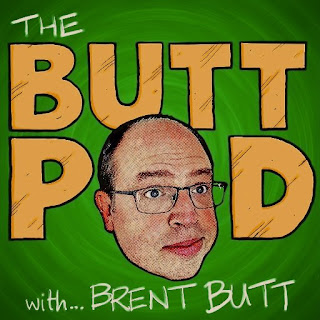 Brent Butt has a fantastic new podcast available now at www.thebuttpod.com and iTunes ! Each week, Monday in my time zone, Brent is putting out a new podcast in which he has a chat with some of his showbiz chums. There is a different guest every episode and they discuss  many diverse topics as superpowers to the process of writing a hit record.

You might be glad that I have given you the domain name above to find the show. In doing a google search for the above image I seemed to confuse the internet ants that gather up information for you. The search engine asked me if I meant Buttpad and showed me a range of images of products available for you to buy that either make the end of your rifle more comfortable on your shoulder should you be thinking of shooting at things for a long period of time, or another item to put in your undies to make your bum look like Kim Kardashians. Once I assured Google that I was looking for a light hearted, comedic podcast then it let me see what I needed and not a picture of the bike from Batman Begins.

I have listened to all the shows available so far, including two that Brent recorded to get the hang of his shiny new recording equipment. I have found each episode is a fantastic "behind the scenes" look at the world of stand up comedy. I used to be a stand up comedian, until the bank manager made me give it up, and love hearing stories from comedians on the road that echo some of my experiences in the past. If you have an interest in the workings of the comedy circuit the conversations Brent and his guests are full of interesting nuggets of information. If you are just a listener looking for a giggle and an entertaining hour or so you can't go far wrong by tuning into the Buttpod.

There are two regular features each week, "More Smarter" and "Fake Sponsor". Every week Brent is wanting to grow more smarter by his guests giving him a little knowledge that he may not have heard before. He is also taking suggestions of such info that has been submitted by listeners. So why not send something in! It seems that facts that are sent in will not be checked for validity so you could make stuff up if you fancy. Here are a few facts of a factual nature for you (one of them may very well not be true) just to give you and idea of what you could use.

Every episode also has an advert for a fake sponsor for the show. These have been very funny, keep an ear out for one for Jarvell Coffee, my favourite so far. I believe Brent is keen to get a genuine sponsor, so if you are such a person that can provide sponsorship please contact Brent by via the above addresses.

Now, as you know I try and cater this blog for fans of Mr Butt's work who live outside of Canada. The best aspect of the show, from this point of view, is that we get to be introduced to comedians and artists we may not have discovered otherwise. The only problem that will arise from this is that we overseas types may not get to see these guys live outside of watching a few You Tube videos. Unless you fly to Canada to see a show, but what kind of nutcase would do a thing like that?

Now I don't want to go an give out a bunch of spoilers and tell you all the great bit's in each episode, and there are many. I will cover a group of episodes every time I post in our news section and instead of listing episode highlights and writing a review I will give you a potted biography of the guests in those episodes, a little taster of their work and links to their websites (click the blue bits).

Much like many a great Marvel Comics title of the Nineties, not satisfied with having a run start with Number 1, Brent put out an Episode 0, which I will get to in a moment - be patient! If you search for the buttpod on google, around five entries down you will find a listing for The Buttpod on www.brentbutt.com . If you click on it you will be whizzed off to a page on Brent's regular official site with a test episode of his podcast on it. This is the only way I know to get to the recording as I can't for the life of me find a link to it on the sites homepage. I am sure it is there, but I am over 40 and by law technology has to baffle me, I am sure you young whipper snappers with your iPods and your funny ways will find it in a jiffy (jiffy is old person speak for a short period of time). I am calling this Episode -1

Brent's guest is comedian and actor Peter Kelamis. Mr Kelamis has been a hugely successful stand up since first breaking onto the Canadian comedy scene with his first headline spot at Punchlines in Vancouver. He has won nominations for stand up comedian of  the year as well as for writing on his CTV comedy special. He is well known for his voice over work particularly as Goku in the Dragonball Anime series. He has been seen in many films and is soon to be appearing in "Why We're Killing Gunther" opposite Arnold Schwarzenegger. Here's a little clip of some of his great stand up ...Peter Kelamis that is, not Arnie. Schwarzenegger can do stand up but most of his jokes involve killer robots or cigars.

Those of you listening to this episode with insane aural recognition skills will know Jamie Hutchinson as "Rocket Ronnie" from the Corner Gas episode "Face Off" (Season One, Episode 12). Jamie has been working the comedy circuit all over Canada for over 20 years. He also appears in film and t.v. regularly including Brent Butt's movie "No Clue". I have to say the following clip is hilarious and caused me to embarrass myself laughing too loud with my headphones on in McDonalds.

Craig Northey is a veritable Canadian rock god/legend/thoroughly nice bloke. Craig is one of the founder members of Odds, chart topping band who's CD's I am having awful trouble getting hold of here in the UK without having to re-mortgage my house. Craig is of course also known for being a long time collaborator with Brent and is responsible for creating the Corner Gas theme tune "Not A Lot Going On"  and end credits song "My Happy Place" Craig often writes the score for movies including cult favourite "Kids in the Hall - Brain Candy". He also collaborates with other artists most notably Steven Page with whom he is touring the UK in October.

Ivan Decker is an award winning young comedian working out of Vancouver. I would imagine one of the awards he has won is "Least Amount of Information about Any Human Being on the Internet Ever". I would love to tell you a little about Ivan but I can find...nothing, which is a shame because, as much as all the guests on the podcast are great Ivan is the best so far. He gives great banter! I could make something up about him like, in his spare time Ivan trains Patagonian Tree Frogs to do impressions of John Cleese, but I won't do that. If you are able go and see him live, then could you ask him a few details about himself and pass them to me so I can put them up here. Cheers!

Episode 2 also makes mention of a chap called Ian Richards at the 37mins 42secs mark. He sounds like a very lovely and handsome chap and no doubt very dependable. The kind of guy you wouldn't mind lending money to and would also allow to date your sister. If you look hard enough you may find evidence of his early days in stand up on the net, but you would have to look reeeeeally hard (although I do have a tape on request!)

That's it folks. More Corner Gas news next month, keep an eye out for a few site updates I am working on and should be up soon. Now go download the Buttpod!