Not A Lot Goin' On - Corner Gas News Special Update!

You are in a brightly lit room. All you have with you is a back pack, filled with barely enough provisions for the day, a loin cloth and dirty big broad sword. You are surrounded by Orcs, Hobbits and various half man, half horse beasts from Hades. What does this all mean? One of two things. Either you are Conan the Barbarian or you are at one of the hundreds of conventions that take place around the world in the summer season. I am going to put all my money on the latter option but if you do happen to be Conan please could you contact me and let me know which dry cleaners you use. As we all know it is very hard to find such a service that uses the correct amount of starch on a loin cloth. I had a terrible time when I last sent mine to the cleaners and then wore it the next time I walked to the shops. Oooh, the chaffing!

If you haven't been lucky enough to attend such an event, let me; as a seasoned professional convention goer of many years, fill you in on all the excitement that goes on.

Conventions can take many forms and cover varied subjects of interest. If you are into  Hot Air Balloon Skeet Shooting ("Pull!" **BANG** **BANG** "Why did you fire twice?" "I didn't"  **Balloon plummets**), Frog Maintenance or Close Harmony Flatulence there will be a convention for you somewhere.

It is a lovely time for all involved. You can meet like minded people and make new friends. There are often stalls selling items related to your chosen hobby. There will be demonstrations, Q and A sessions and competitions. If reading is your thing, at the nearest book fair maybe you will find that rare first edition of "Sherlock Holmes and the Mystery of the Missing Manuscript". A book so rare even the story is missing from the pages. Some say that the relatively unknown masterpiece was put together last minute by Sir Arthur Conan Doyle. Arthur (or Artie D to his friends) who, when facing missing yet another deadline, handed in a blank note pad to his publisher. When told that the story was "a little light on detail, plot and character development" he merely replied the whole thing was stolen by Moriarty.

Now the majority of conventions cater for those of us who enjoy their pop culture. One of the most popular elements of a movie and television convention is Cosplay. The word Cosplay is coined from the original Greek. Cos meaning "to dress up" and Play meaning "in Spandex so close fitting that passers by can tell what religion you are". Many people enjoy spending hours and hours putting together costumes of intricate detail so they can attend conventions looking like screen accurate versions of their favourite characters. Here are some of the best examples to be found around the net. 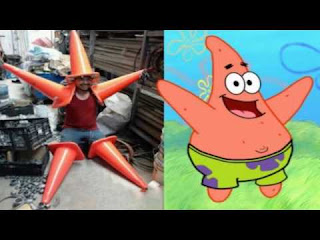 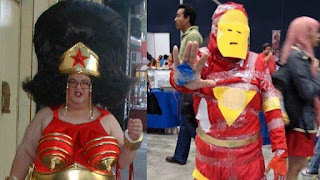 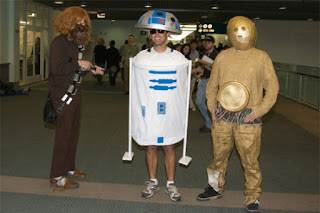 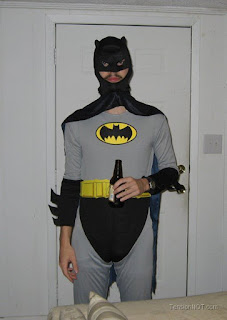 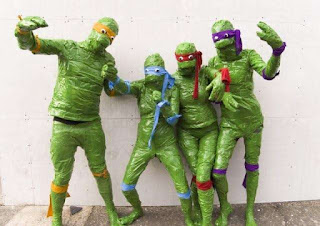 Now, I know what you are thinking. You are thinking, "I could probably get away with eating the beans in the fridge, what's a day or two on the sell by date?". You may also be thinking "Why would I attend a convention if there are marauding half horse, half human beasts from Hades or whatever it was you called them at the beginning of this post that doesn't seem to be wanting to get to the point any time soon". Ah, well fear not young traveler, the point is coming soon enough. Also my horsey description was merely a little joke of the humorous variety. The closest you will get to such beasts is these guys. 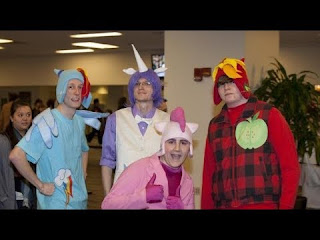 Conventions have born no end of specialist groups of avid followers of pop culture, one of which are The Bronies. These are male men of various ages who are just peachy keen on My Little Pony toys and cartoons. Yes, you heard me right. That cute set of plastic gee gees that most thought were the exclusive domain of pre-school females has been hijacked by an ever growing group of gentlemen who may very well need medicating before being released into public.

However, the number one draw of visiting a comicon is the opportunity to meet the stars of the big and little screen. Hold tight folks, here comes the point of my post 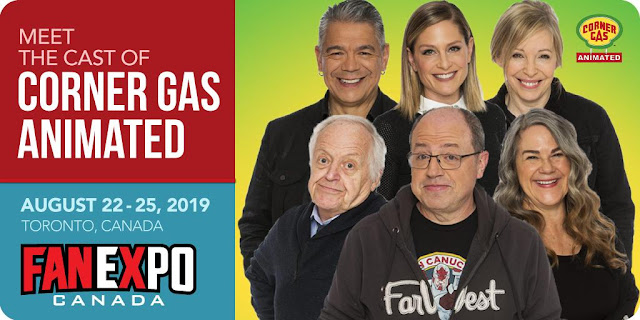 Exciting news dropped last week that the majority of the cast of Corner Gas Animated will be attending their very first convention. Those of you lucky enough to be in or around Toronto on August 25th have the chance to meet Brent Butt, Nancy Robertson, Eric Peterson, Lorne Cardinal, Tara Spencer-Nairn and Corrine Koslo! Unfortunately, due to prior commitments Fred Ewanuick and Gabrielle Miller can not attend the event.

Canada Fan Expo takes place from August 22nd to August 25th 2019 at The Metro Toronto Convention Centre. The cast are appearing on 25th only, billed as a special appearance. There are no details as yet what they will be up to whilst at the show. No doubt signing autographs will be their main activity of the day. Generally autographs at conventions will come with a price tag, however Corner Gas signatures have yet to be given a value by the organizers. Usually at these events photos for signing are made available as part of the cost of your autograph but you will be allowed to bring your own items to have signed if you have something special you would like to get squiggly ink on.

Also no news on possible Q&A sessions and photo opportunities with the cast. As soon as the information is made available I will update this post so keep checking back.

You can check out all the information, buy tickets and see who all the other great guests are here

Excited yet! No sleep for you until the end of August, right? Now, I know I have made fun of conventions above but I have found them to be a truly a great place to spend the day. Being a that I have flown the geeky flag all my life it is lovely to have a place to go and spend time with people who are like minded. It's fun for all the family and there is always something to see and do.

I am trying desperately to be there myself. If I manage it and you see me walking about looking all English and stuff please do come and say hello. I will be happy to sign anything you put in front of me, including elderly relatives. I will be Cosplaying, dressed up as the Camel from Ishtar.
Posted by Ian Richards No comments:


In previous posts I have mostly concentrated on the talented folk in front of the camera. David Storey, Craig Northey and Jesse Valanzuela obviously don't count...because they are not talented. Ha! Of course I jest, those three chaps could combine to make some sort of talent superhero group. The Troubadours! If you put the three of them on stage in a talent show, Simon Cowell would get so excited he would jump straight out of his mirkin and hand them over all the record contracts. No, I mean the three of them are behind the scenes peoples.