There are many elements that are absolutely crucial when creating a culenary delight in the kitchen. Excellent ingredients, exsemplary cooking utensils and equiptment for example. However, top Dog River Chef, Mr. Oscar Leroy would have you believe that there is something far more important than these mere basics of the trade. According to Oscar the number one thing that any one even attempting to put together even the simpliest of desserts should consider is Geometry.
Recently his wife Emma, offered to purchase for him some Rice Krispie Squares to wit he pointed out they are never squares, they are rectangles.*
This doesn't often happen but I am afraid I am going to have to agree with Oscar on this one. On further investigation it would seem that geometry is indeed of vital importance when performing the art of cookery.
In the 70's it was extremely popular to eat things that are inside other things. As we can see from these examples without geometry dinner in this decade would have all gone to hell in a hand basket! 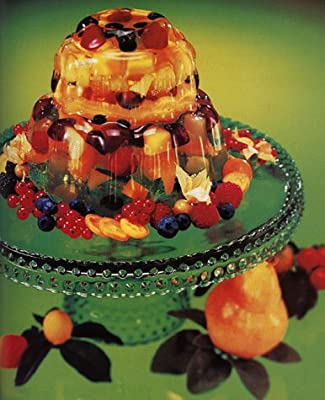 See how if the jello to fruit ratios were off in any direction, and not placed at exactly the correct angle to it's ajacent piece of fruit and or jello Grandma's lap would be full of Kumquat pieces as soon as pudding was served.
The 70's were truly an age of innovation when it came to geometrical cuisine. The next picture is an example of the groundbreaking research that took place at the Festmat i Vackra Monster Schweiziska Institute in Sweden**. Such was the accuracy of the placement of these party foods that if you follow the pattern to it's natural mathmatical conclusion the deviled eggs were always pointing due north. 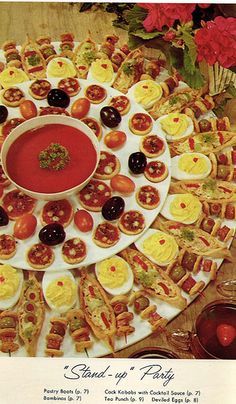 Of course, they didn't always get it right back then. There was little, if any, health and safety available at a 70's dinner table. The following picture contains everything that was expected in a typical 70's packed lunch. In 1974, my Father used to work in a very popular Sideburn factory in London, England. This was in the middle of the Sideburn boom, everybody was wearing them and at one point demand could not be met. Unfortunately, he was caught in the big hair crash of 1979 and was made redundant. Luckily his skills were transferrable and he soon got work making Mullets in the early 1980's. When he had his union required lunch hour this is typically what he would find in his lunch bag. 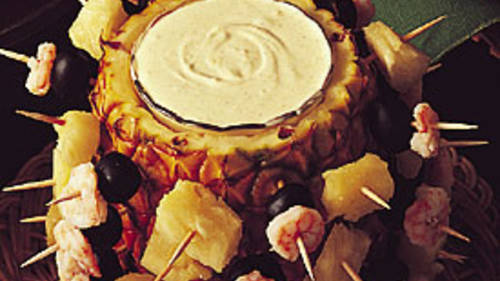 Now as we can see this item contains everything that was required of a period dish. Food inside of food, food sticking out of food and everything beautifully in alignment. However, these delights were banned after a particularly enthusiastic food fight took place and everyone ended up in the eye hospital.
Now, as Oscar correctly points out, the geometry fad has sadly left the food world long behind. Cookery has never been the same. I can hear you thinking, angles and the likes can't be that important when making, say, a cake? Think again! Consider the humble Hedgehog based birthday cake. 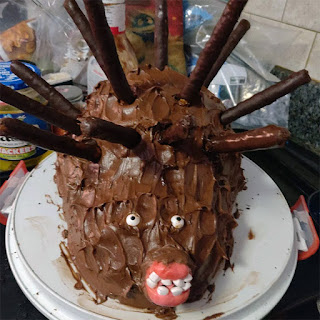 You can't unsee that now! A thing of nightmares. Oh for a protractor and an even vague idea of what a Hedgehog actually looks like! I don't think I fancy biting into a cake that might actually bite me back!
So you don't make similar mistakes, and in honour of Oscar and his requirement for accurate cake dividing systems, here is a recipe so youmyou can make your very own delicious Crispy Marshmallow treats.

I hope you enjoy this most right angled of treats. What more evidence do you need of the genius of Oscar Leroy? Just in case here's one more example of a kitchen without a ruler in its drawers. Spongebob Squarepants - the clue is in the name! 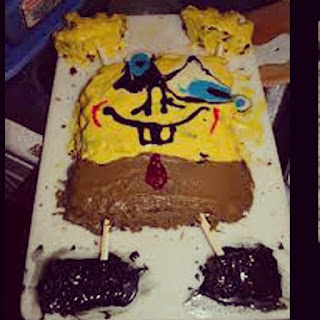 * Season 1, Episode 3 - Pilates Twist
** How many of you actually Googled this?
Posted by Ian Richards