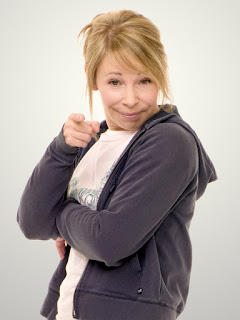 You might not realise this from reading my previous work here at Fan Corner but I am not a professional journalist. Hard to believe, I know! I am not a real writerer. Even so, I feel it is important to approach your chosen subject matter with a strong work ethic. Ethic is of course a Latin word comprised of "Eth" meaning "To Work" and "Ic" meaning "As quickly as possible before The Walking Dead is on the telly". I always have this in mind when I bring you all the latest, up to date Corner Gas news and features as accurately as humanly possible without doing any actual work and/or research.

This is not an easy guideline to follow, there isn't a huge amount of background information out there about our favourite show and those involved in it's creation. You have to do a lot of digging. For three hours now I have been having a very heated argument with my Amazon Echo Dot. Alexa insists on giving me the directions to Oxford Circus when I have asked for biographic details on Nancy Robertson. Yet, despite having to throw out all my ethical integrity, I have persisted and discovered all sorts of information about this wonderful actress that is guaranteed 100% factual, apart from the parts that may very well not be.

Nancy seems to have always been drawn to a theatrical life, this is an assumption on my part based on the half a dozen web entries that start "Nancy Robertson studied drama at High School and graduated in 1990". Her first job as a teenager was in a salon washing hair which I would assume didn't require much acting except from maybe telling an old lady that her blue rinse looked fabulous.

After High School, she attended The Peter Breck Academy. Peter Breck was an American character actor who  was featured in classic t.v. western Maverick and is best known as starring in The Big Valley opposite Barbara Stanwyck. Mr. Breck was asked to chair a few acting lessons for young actors when he moved to Vancouver in the mid 1980's. These weekly lessons blossomed into a fully fledged acting school that he ran for ten years.

Nancy also honed her skills at The Vancouver Arts Club Theatre Program. The Arts Club are well known for their quality productions of plays, produced by their own theatrical company which are presented across three theatres around Vancouver as well as touring around Canada. The theatre program supports young artists and develops their talents through various workshops covering all areas of theatre.

In her early years Nancy had jobs in a cable company call centre and a t-shirt shop before she started to earn a crust in fringe theater and as part of Vancouver TheaterSports League a pioneering improvisational comedy troupe whose other alumni include the hilarious Ryan Stiles and Colin Mochrie among many others. VTSL has become, since it's inception in 1980, a world leader in the craft of theatrical improvisation becoming known for it's blend of dramatic comedy that provides all the excitement of live sports. Whilst performing there she developed a reputation for being one of Vancouver's best improvisational actors. VTSL produced a short lived sketch show The 11th Hour which is best known for having the same name as roughly 37,000 other television shows and as such is afforded little or no space on the internet.

More television and film roles followed. Nancy notably featured in The New Addams Family, as Samantha. The series was an update of the original television show adding elements of the dark humour that featured in the two popular movies that were produced in the 90's. In 2003 Nancy was cast in a starring role in mockumentary The Delicate Art of Parking.

The movie, which also features Corner Gas co-star Fred Ewanuick, tells the story of a director who embarks on making a film about corruption within the institution of parking enforcement. Whilst following an earnest traffic warden, who is very proud of the job he does, the director finds a new side to the story and soon finds himself on the verge of discovering a true conspiracy. Directed by Trent Carlson, who also co-wrote the script with Blake Corbet, The Delicate Art of Parking drew favourable reviews some comparing it to the classic mockumentaries of Christopher Guest. It was a favourite of the festival circuit and grew to develop a cult following. Nancy received a nomination for a Leo award for best female performance in a supporting role.

After many more roles, on screens large and small, in 2004 we were introduced to Wanda Dollard, sassy know it all clerk at Corner Gas. In this role Nancy would become a household name throughout Canada. During the shows run Nancy won and was nominated for Leo, Gemini and Canadian Comedy awards. A comedy match made in heaven was made when Nancy married her Corner Gas co-star Brent Butt in 2005

In 2010 she returned to television screens in Hiccups a new series created by her Corner Gas co-star and now husband Brent Butt. Nancy plays Millie Upton, creator of popular children's book series "The Grumpaloos" and sufferer from often disastrous anger management issues. The series follows Millie as she attempts to get to grip with her temper with the help of life coach Stan Dirko, played by Brent Butt.

The series ran for two seasons and every episode showcases Nancy Robertson and her formidable comedic talents, even more so than Corner Gas did through out it's six season run. Millie Upton, with her occasionally volcanic temperament  could become an unlikable character if not handled correctly. Nancy delivers a performance which creates a very lovable and relateable Millie who is always hilarious to watch. Another Canadian Comedy Awards nomination was given to Nancy in 2011 for her work on Hiccups.

Nancy Robertson continues to light up the screen in various unforgettable roles and cameos. She returned to the role of Wanda for Corner Gas: The Movie in 2014 and will of course be lending her vocal talents to the character in Corner Gas: Animated later this year.

We at Corner Gas Fan Corner always look forward to watching any project featuring the wonderful Nancy Robertson...but not right now, The Walking Dead is coming on .