Good Afternoon. My name is Dr. Hugh G. Bosom. I am senior executive of the Registration Union of Double Entendres. We at R.U.D.E. are in sole charge of documenting evidence from any media that present naughty things to an audience wrapped in thinly veiled innocence. We then place our findings in our monthly magazine for public consumption. In other words we grab hold of someones unmentionables and show them to everyone.

Only yesterday I was fumbling under the desk with my secretary because she had dropped them. "Norma! All these letters on the floor! Please be more careful Miss Stitz!" It is a very rare day that my secretary doesn't wander into my office and make a mess on the carpet. The other day I stepped in something she had left just behind the door. Lucky I had my shoes on! Drawing pins, everywhere!

We get a lot of letters and parcels sent to us. I caught our Postman dropping one in our doorway once. What an awful pong! He'd broken the bottle of aftershave I had ordered from Amazon.

We gathered up the letters and I gathered up Norma. She asked me if I wanted her to pop them out for me, however, I have my own envelope knife and told her she should probably start weighing my plumbs. I am on a strict diet and I am only allowed 50 grams of fruit a day. I could never manage one of her melons, let alone two of them, they are far too big.

One of the letters I had received was from one Michele Sponagle, a gifted writer and all round good egg I had become aware of through her duology of Corner Gas episode guides. She wanted to draw my attention to a particularly naughty episode of Corner Gas which she rather enjoys. Michele writes -
"I have a great appreciation for the episode, "Get the F Off My Lawn", from Season 6. It was a very cheeky script that had Lacy looking for the F and E from the sign for The Ruby Cafe. It was a bit risqué, which I loved. It's also special because it was an episode from the last season. It really demonstrates that Corner Gas delivered great laughs to audiences from beginning to the end of its run on television. Even the title of the episode still makes me smile!" 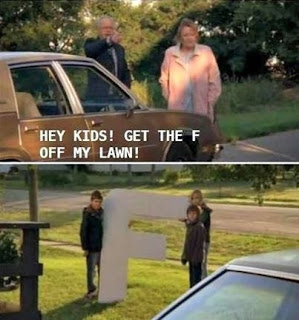 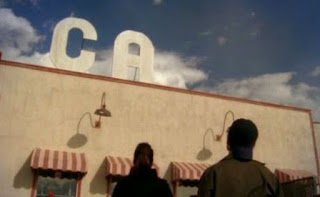 A wind storm has blown off the F and E from the sign on top of The Ruby cafe. Lacey spends the majority of the episode looking for the signage causing all sorts of dirty looks from people in earshot when she asks if anyone has seen her F and E. Her quest is ably assisted by one half of the Dog River police force, ever affable Davis. The other half Karen Pelly, has been asked, or told, to officiate the yearly Dog River jam making competition by Mayor Fitzy. Fitzy has incapacitated himself in a Hank related injury and cannot provide judging responsibilities. All she has to do is name Emma the winner as no one else has won the competition in the last fifteen years. Karen fails this simple task much to Oscar's lament as now he won't get his picture in the paper. Meanwhile, over at Corner Gas, Wanda is on strike in an effort to win herself better working conditions. Among her demands, a stool that doesn't wobble and better colleague personal hygiene. Fruity language abounds, but fear not the petrol pump bell protects sensitive ear holes.

The episode is not only filled with classic Corner Gas moments. We are treated to a fantastic bit of Oscar nonsense in the pre-credits scene. Later in the episode a stand out is a bit of business in which Lacey calls a specialist store front sign company to buy a replacement F and E is laugh out loud funny and just down right genius. An aspect of the show that may escape some is that we almost see another side of Lacey here. The normally prim and proper aspect of her character is chipped away ever so slightly when she drops the occasional F bomb, accidental or not. 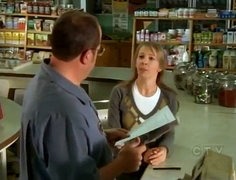 Through out it's running time, "Get the F off My Lawn" showcases how well Corner Gas can fit together so many different types of humour. There is clever word play, bawdy double meanings straight out of any comedy movie produced in England during the 1970's. There are hints here of pure silliness that wouldn't be out of place in a Naked Gun movie. There are set ups that require the viewer to suspend their disbelief and buy into the premise that there is a shop that only sells large letters for shop signs. It's a sharabang of great ideas that could drive around the corner of silly street and end up lost somewhere in Stupidity Avenue. As ever the cast and regular director David Storey steer proceedings of Norm Hiscock and Kevin White's script in the right direction. 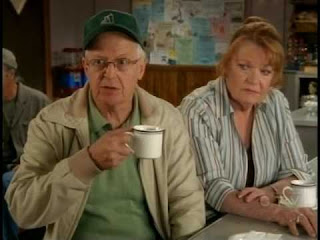 As Michele points out, this episode comes late on in the final season and yet everything is still on point. Stand out performances from Nancy Robinson and Eric Peterson here, who are on hilarious top form. Brent Butt and Fred Ewanuick have some great moments although they do take a back seat to other players. We are also treated to the scary side of Emma when we see how she deals with crushing defeat. The simmering energy that is the chemistry between Janet Wright and Eric Peterson helps the viewer fear what may well happen to Oscar if Emma doesn't get her title back.

So if you own the Corner Gas Season 6 box set, we at R.U.D.E. highly recommend skipping straight to "Get the F off My Lawn". Why not get it out and look at it with a loved one. Maybe let them have a go at putting it in and turning it on. Then maybe watch the DVD.

If you would like to nominate your favourite Corner Gas episode for review send your choice, why you love the episode and your e-mail address to me at ianblogpaper@gmail.com or comment here. If your choice is used in a future post you will recieve a natty certificate to show off to all your chums!
Posted by Ian Richards