You know, watching the world of the internet expand, as it does at roughly three times the speed that your broadband can handle, you would imagine it to be an exciting place to set up shop. You would be right. Now, I know what you are thinking, with all my reader, I am probably talking about how exciting it is seeing all that sweet internet cash I hoover up in sponsorship and advertising. That I am about to wax lyrical about the time I was invited to a red carpet movie premiere and how I saw Madonna scarf up all the free popcorn, burp at some paparazzi and leave, getting married at least three times before she reached the exit. Well you would be wrong!

I get my kicks from reading my statistics, something Brent Butt ribbed me about in a recent interview for my Jackass-Cast podcast. Many a heady hour has been spent in the Corner Gas Fan Corner Office/Garage/Utility space scanning over statistics and wondering why no one has read my latest post regarding why socks that go missing in the wash, from all around the world, some how end up in the recycling bin of Mr Nigel Knurrds of 77 Railway Cuttings, East Cheam. I sit there, looking at numbers and listening to the boiler make noises that it ought not make and will possibly be symptomatic of something that will be expensive to repair or at least give the cats a good scare when it finally goes bang, in wonder. Yes, it's nerdy but it fascinates me when I see that people read my silly scribbling all over the world and I love to see countries jostle for position at the top of the readership rankings.

Normally the majority of my readership is in America (since Amazon started showing the show on Amazon Prime), Canada (since Canada started showing the show ..well, always) and U.K. (because my mum is very proud of her little Schnookylumps). However, at the beginning of December that changed. Scorching up the ranks came Ukraine! This lovely country stayed at number one for two weeks and is now sitting at fourth now the other three major players have come out of their holiday season induced sugar coma. 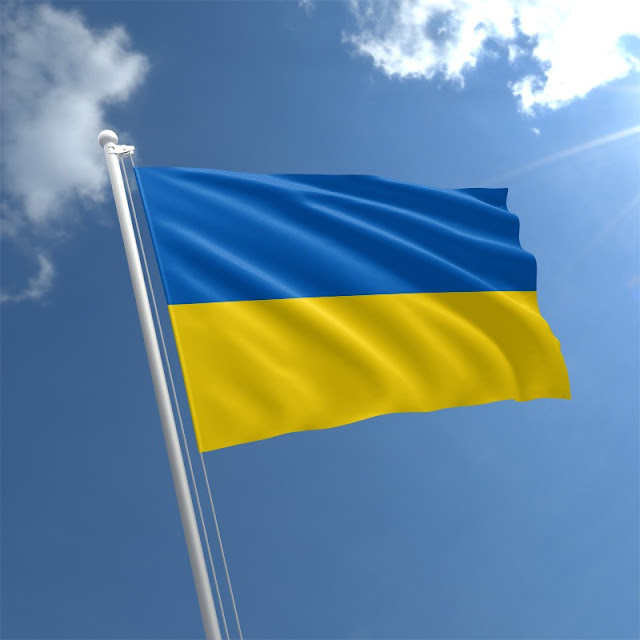 I was confused why this would happen, seemed like a bit of a random country (no offense intended) to show a huge fan base for a Canadian sit-com. How stupid am I, there is a massive connection with Ukraine and Corner Gas which I may dig deeper into in a later post. However, my friend Sharon Szczerba-Gilbert and current holder of the title of the Officially Unofficial Second Biggest Corner Gas Fan in the World asked to write a little post about Ukraine and Corner Gas. Sharon has Ukrainian heritage so I figure who better to put this thing together. Plus it gets me out of doing a ton of work and I am all for that.

It also happens, that on day of publishing January 6th 2020, Ukraine is celebrating Christmas. What perfect timing!

Dog River Vice (Season 3, Episode 3) is a favourite episode for many Corner Gas fans; it has so many great lines that are fun to say, like quitting knitting! But the episode is even more appealing if, like me, you are Ukrainian. So, as a Ukrainian Christmas treat I give you this article focusing on the Ukrainian elements of Dog River Vice. Even if you are not Ukrainian, I think you will enjoy this article. Look at how much fun Oscar has going to Ukrainian dancing and making Pysanky; he loves it even though as Emma points out to him, “You sir are no Ukrainian!” So sit back, relax and follow me as we explore the Ukrainian elements of this episode and I will also tell you how we Ukrainians make Holubsti (it’s not what you think). 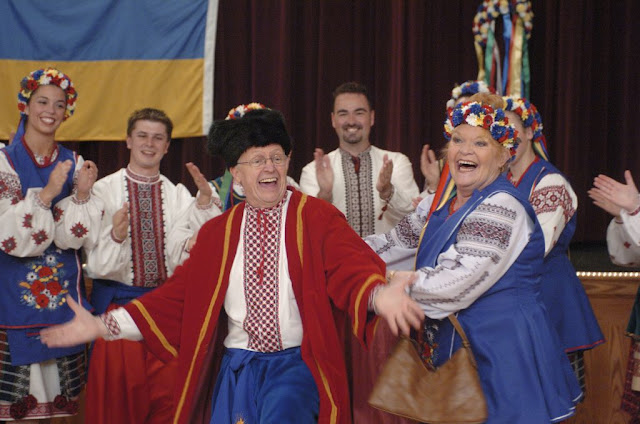 In this episode Brent and his mom challenge each other to quit their vices. Brent gives up coffee and Emma gives up knitting. To keep preoccupied so she doesn't think about knitting, Oscar and Emma attend Ukrainian Dance night! The dancers featured on the show are from the Regina Tavira Ukrainian Folk Dance ensemble. Oscar and Emma seem to enjoy the dancing and Oscar becomes quite immersed in the Ukrainian culture. He utters Ukrainian phrases, paints Ukrainian Easter Eggs, asks Emma to make Holubsti and spouts tidbits about the Ukraine!

Oscar explains that Ukrainians call Perogies "Peroha" and that’s what my Baba (Grandma) , Gido (Grandpa) and my Mom always called it. Later, when I took a Ukrainian language class I learned the more formal name is "Varenky". Holubsti are what we know as Cabbage Rolls, sorry to disappoint those of you who thought it was something more risque! 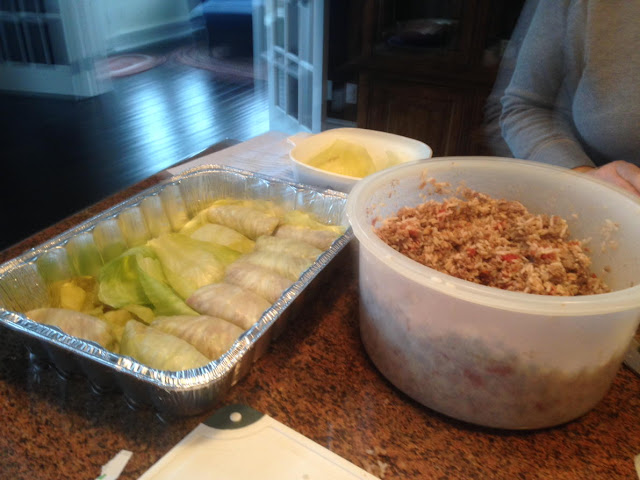 I for one was very impressed with Oscar’s pronunciation of the Ukrainian words he says in this episode. Many words in the Ukrainian language are like tongue twisters to non native speaking Ukrainians. My mom's maiden name was Szczerba, I added her maiden name after she passed away in honour of her memory and many times people have asked me to pronounce it again and then of course spell it for them

I wonder if the writers asked cast member Fred Ewaniuck for any pointers when they wrote this episode since he is part Ukrainian. On Twitter awhile ago I was bragging about my cousin eating 30 Perogies (Petaha) and Fred Ewaniuck responded that he had eaten over 40 in one sitting once! Maybe he should have gotten the pig nose and been named the Perogie pig instead of Lacey; I dare say he might even have given Brent a run for his money, but that is another episode and a debate for another time. 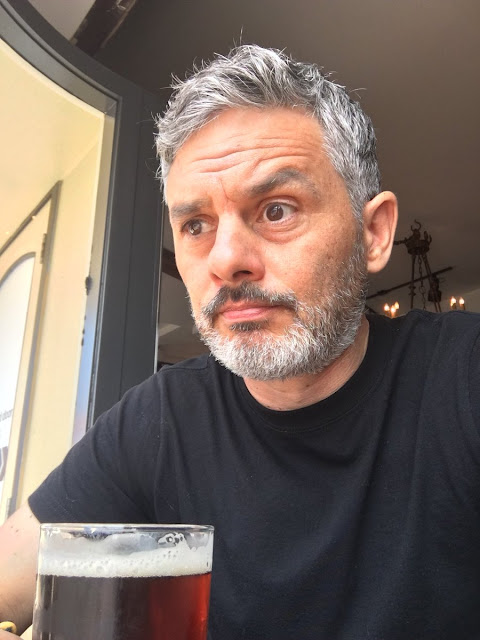 Another great line in this episode is when Brent refers to Ukraine as “the Hawaii of eastern Europe"! Notice I didn't call it “the" Ukraine; you wouldn't call it “the" Canada. With the combined frustration of having to give up knitting and then having to endure Oscar’s incessant Ukrainian trivia, Emma loses it and Brent ultimately wins the contest! At first Emma was successfully embracing her “ inner non knitter", but in the end Brent is victorious though he had his own set of hardships giving up coffee and always being tired. 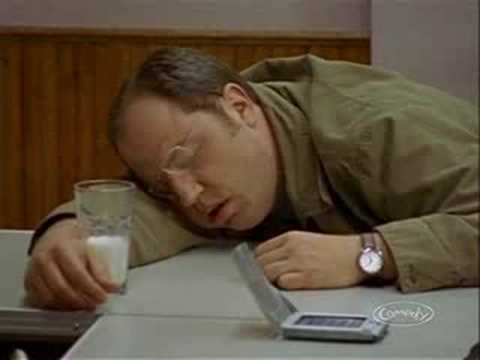 I will finish with a trivia question featured in this episode:Canada has more Ukrainians than any other country except for one. Can you guess the country?

Thank you Sharon for all your hard work saving me no end of hard work ...that I probably wouldn't have done in the first place. Your efforts have propelled  my enthusiasm to renew my efforts to maximize my laziness, which in itself sounds like way to much effort. That's a lot of efforts.

Also thank you to all of you in Ukraine for your support of my site and the world of Corner Gas. If you are from that lovely country and a) are able to award me with some sort of national medal for my work or b) can offer me a free expenses paid holiday please feel free to leave messages below.

Of course I jest, please leave messages below where ever you are from and maybe tell me your connections with Ukraine and why you love Corner Gas so much.

...no but really, a holiday would be lovely.
Posted by Ian Richards