Welcome back to Ilfracombe Municiple Village Hall and Lido! We are here celebrating the 100 greatest Corner Gas moments as voted for by people all around the world who had nothing better to do! All the guests are re-seated now. I would like to confirm to you all that the fire has been put out. If next year the Academy could choose someone other than Bob to man the complementary BBQ. I have warned you before what happens before his medication kicks in. Right, with no further ado, no dilly dallying, let's get straight on with the count down after this message from our sponsor.

Have you ever had this problem. You've gone out for the evening, to enjoy a quiet drink with friends, things are going well, the fine dining is top rate and the company even better. Just as the matre de is serving the after dinner mints to accompany the fresh roast coffee your date turns and whispers in your ear seductively "You forgot to put your pants on again."

Well what are the chances! That explains why you kept dropping the car keys on the ground every time you tried to put them in your pocket!

Never fear CGFC Industries has the answer to your sartorial mishap. Our Emergency Trouser Vending Machines(TM) have been installed in bathrooms across the country. Insert just three dollars and select from your choice of denim, corduroy or linen! There will be a queue, our pants are going fast, so be sure to check our machines as soon as you realize your knees are colder than they should be.

Please be aware that if you find you have been vended a pair of pants with only one leg and are all rubbery, you've put your money in the wrong machine.

CGFC Vending Machines - Put some pants on ya Doofus!

How do you make a salad explode?!

Marvin Drey, the taxman, has come to Dog River to talk to Oscar. Good luck catching up with him....Jackass!

Marvin: Is your father coming in today?

Brent: Is he in some sort of trouble?

Marvin: Trouble? What makes you think he's in trouble?

Brent: What if I told you he was out of town?

Marvin: Is he out of town?

Brent: What if he was?

Marvin: Do you know where he is or not?

Brent: I was just seeing how long we could answer questions with questions. That was fun wasn't it! 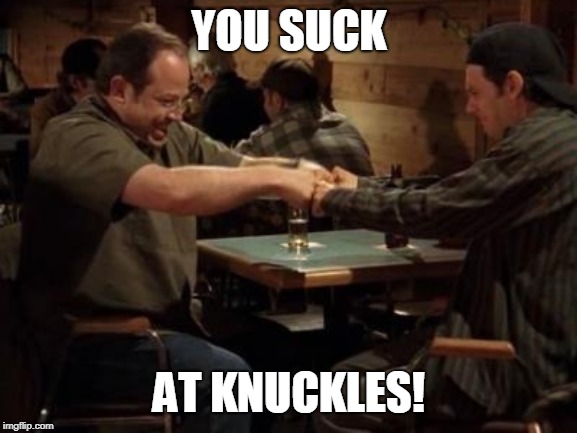 Davis: You were out there rooting around in your truck for ten minutes. If you do that five times a day, multiply that by 365 days for 36 years, you'd have wasted 12 years of your life.

Davis: I don't think I carried the 4

Davis: Anyways, it's something you should think about.

Hank: Maybe I should park closer

Davis: Think more about it

All I can say is, I wish this scene hadn't been voted for. It's hard to transcribe something with some many words that are hard to spell, like Lambergeeny!

Hank: I could save up and buy a Lamborghini

Wanda: You have to save up to by linguini. You can't afford that magazine...I should have said magazini. Linguini then magazini. Oh, that would have been great! Could we do it again?

Brent: no. Look, Hank, if you want to shoot for the moon, you go ahead

Hank: All I want is a sports car. Let's not get carried away with space travel, huh?

Wanda: You'll never have a Lamborghini, you weenie, because your brain is teeny. 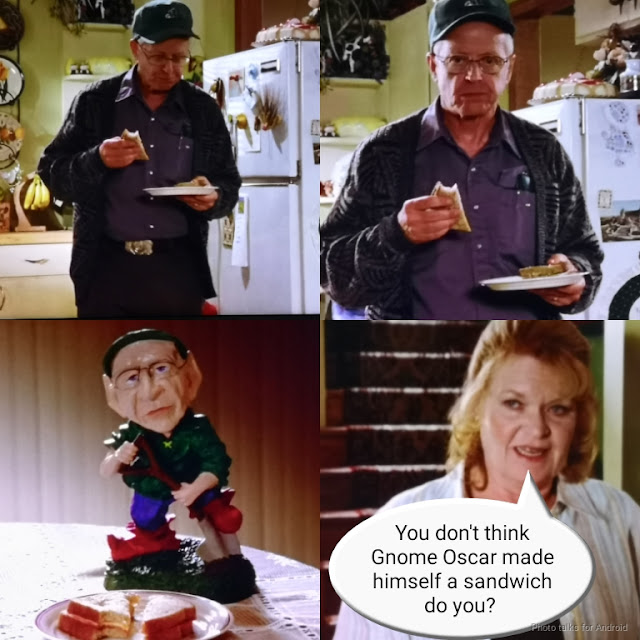 Oscar wants to prove he is a great chef....by having Karen do the cooking for him!

Karen: Listen, Oscar, I would prefer it if you didn't tell anyone I was cooking for you

Karen: Don't you wanna know why?

Oscar: Does it seem like I wanna know why?

Karen: I read an article that said career women shouldn't exhibit traditional woman skills, like cooking because it can undermine our status and we could lose the respect of our male collegues

Oscar: (Chuckles) Whatever you say, Toots

Brent and Hank have borrowed Wanda's telescope to keep an eye on Corner Gas from a far. Problem is, they didn't tell her they were going to borrow it. 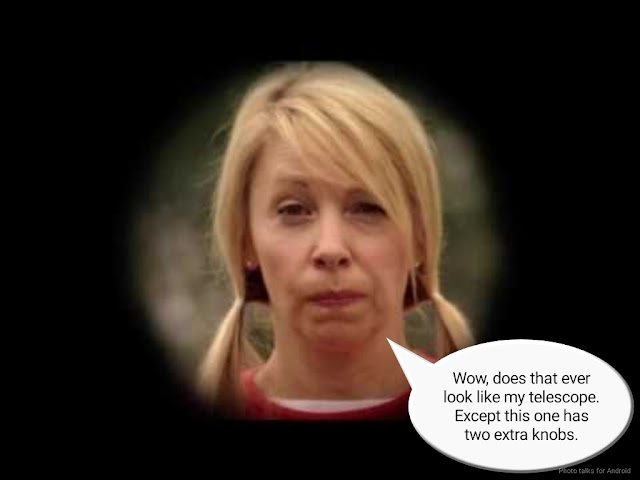 Karen is helping out at the old folks home

Mrs. Carmichael: I didn't know the watch was his. I can't see well

Karen: No I'm here to read to you

Mrs. Carmichael: Oh good, this is one of my favourites (She hands Karen a big paperback with a bookmark in it)

Karen: Passion in the Willows. (Ahem)....ok! The sun glistened off the bead of sweat that rolled down Nurse Chambers....ample bosom? Her Aurburn hair danced in the wind she glanced at his beefy....

Emma appears by the door holding a dinner tray

Karen: How long have you been standing there 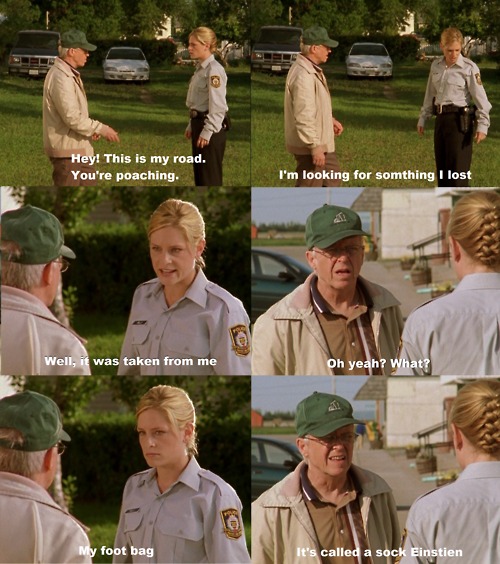 Hank and Oscar are going to make a fortune with their new gumball machine in The Ruby. Oscar is trying his hand at marketing and has a new company name and logo. 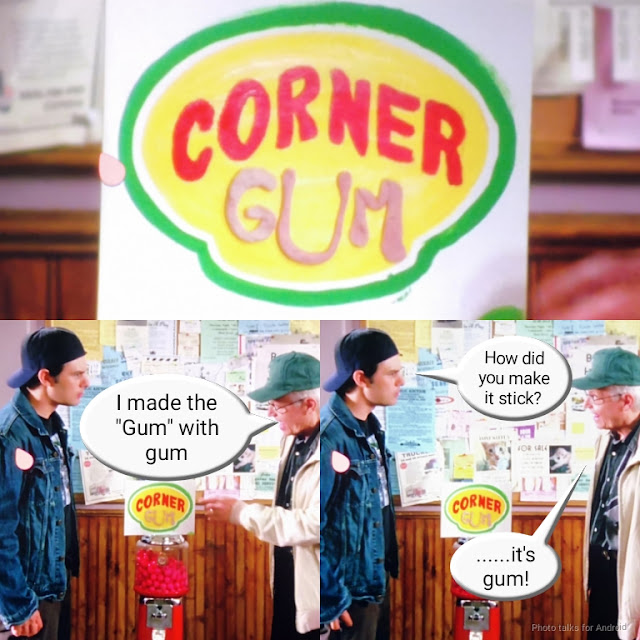 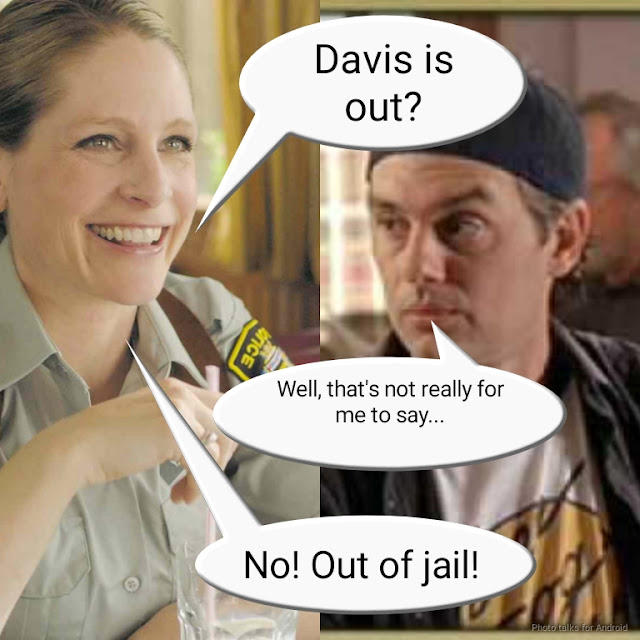 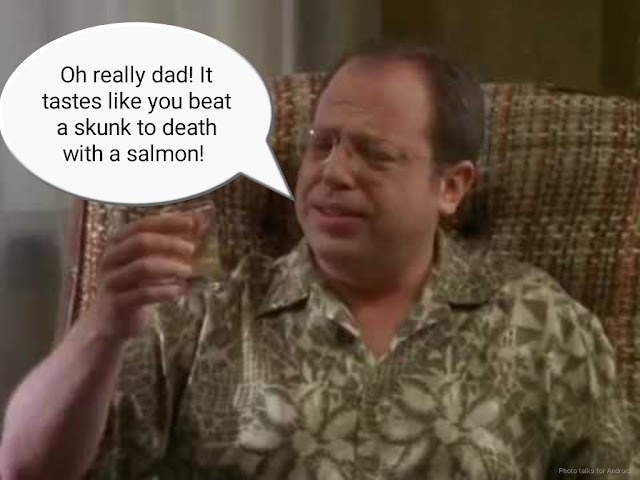 Wanda has a new scooter and is rather enjoying riding around town on it. That is until Brent runs it over and doesn't own up to the crime. 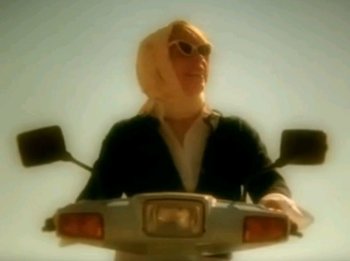 Wanda: When I find out who did that.... I'm gonna take them out for a beer.
Brent: A beer?
Wanda: Yeah... and while we're out for that beer I'm gonna hire some thugs to smash all the windows in their car.

You know, sometimes there comes along an episode you can just relate to.

Everyone loves the ATM, Dog River's hottest tourist spot, in as much as you get to play spot the ATM. 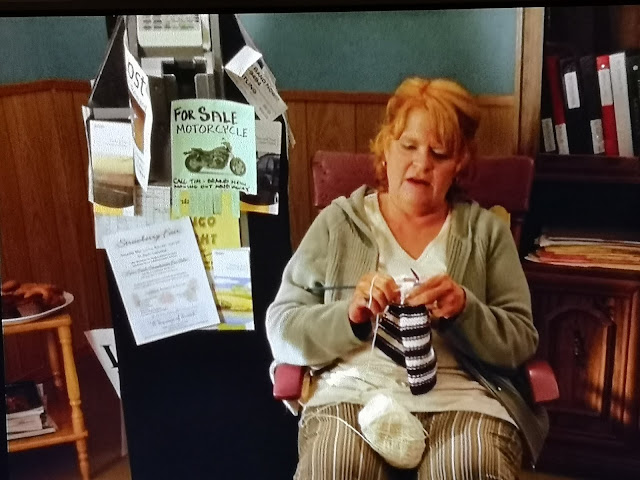 One word and I know exactly what you are all doing....and I expect you to clean that up! 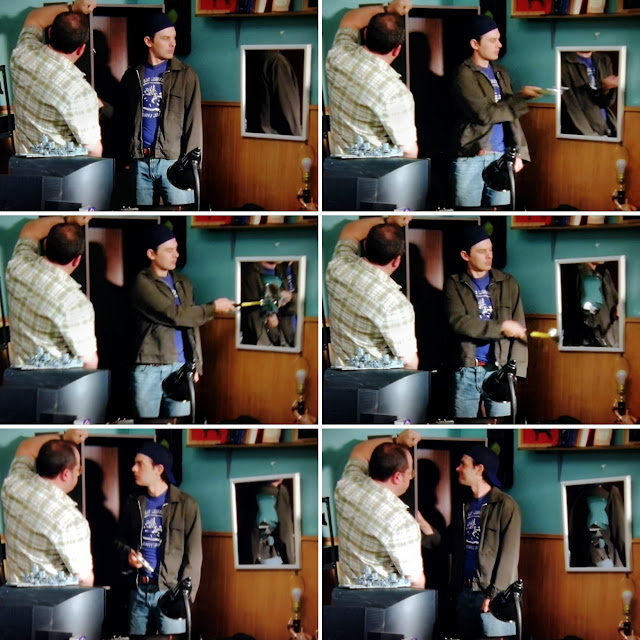 Will they won't they? (Excuse the blurry screen shot - it's hard to capture a meaningful fleeting almost kissy face). 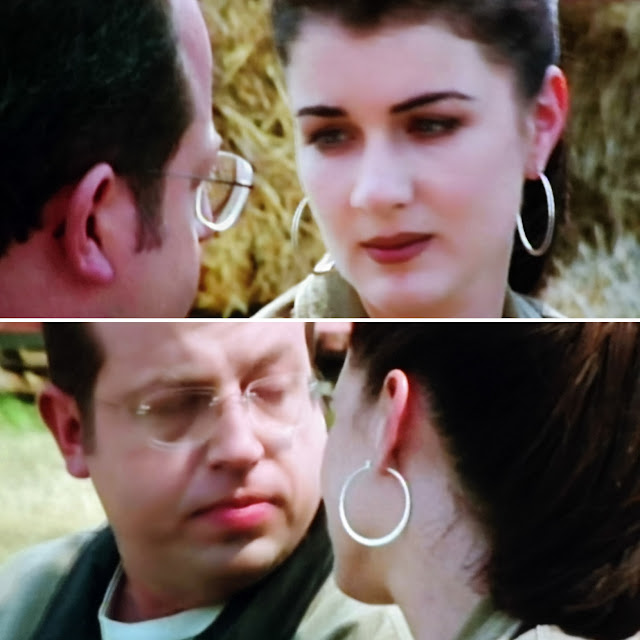 Oscar is dodging his Jaywalking tickets that crafty old coot! 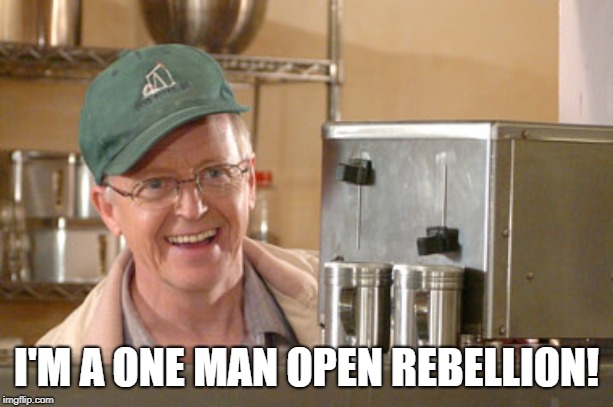 Be careful what you say about the Corner Gas Guzzlers!

Hank: I think what Brent is trying to say here, Wes, is that we came here for a good time. Even
though you called us a bunch of nimrods

Paul: Earlier, he called you a bunch of useless ragtags..

Hank: Just stay out of this Paul! You just want us to bet so we'll buy more beer and what not at
your place

Hank: Ragtag? I don't think I like the sound of that

Brent: Sticks and stones. Hank, they are just words

Paul: He also called you mamby-pambies

Brent: oh, someone wants their teeth kicked in 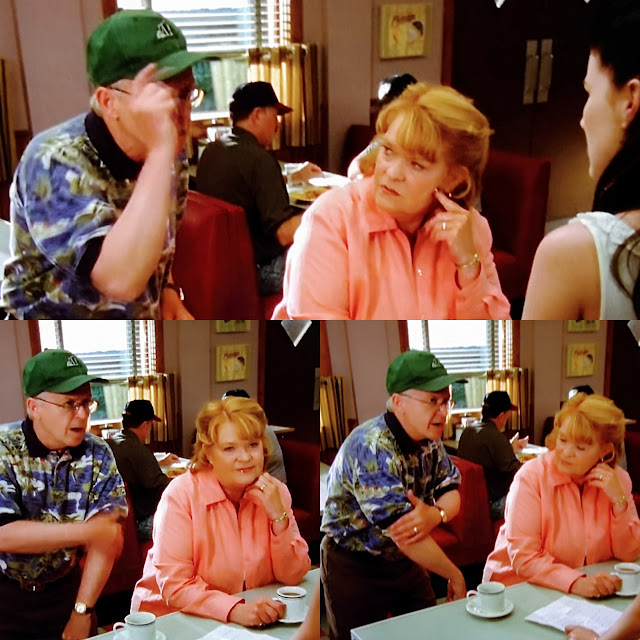 1 - If Oscar touches his hat three times, Leave the first pitch. If he touches it once, it means he touched his hat once

Brent has Oscar helping out at Corner Gas

Brent: I understand it's an odd request. Especially getting him to work for free

Wanda: You got me to work here for almost free

I may have not have learned much putting this list together, but I do know it saves a whole bunch of time if someone on the net has already made the image you need

So there we have it folks, we have hit the half way mark! That's one heck of a haul of hilarity! How can we top these I hear you ask? Only one way to find out. Tune in after these messages.

New from CGFC Industries. The all in one, handy dandy household instrument that you have been waiting for! Fifteen handy attachments all of which have seventeen attachments to attach to them. It rotates and folds away for easy storage. Only one quick charge and the battery lasts a full three hours. Light weight and vacuum packed for instant freshness. Made from 100% recycled materials. Waterproof and wind resistant. All at one low, low price! It performs like no other household tool you have ever owned. Only problem is, we don't know what it does. Buy one now, find out, and let us know.
----------

With thanks to Blog Paper Twitter followers, the Facebook View From Dog River Community and in particular Sharon Gilbert-Bernard and her whole family and Lenka. Biggest thanks to Bill Concannon who with a throw away comment somewhere on the internet sparked this whole idea.
Posted by Ian Richards