Hello everyone and welcome to your favourite game show Name That Gnome! We have three teams of wonderful contestants here competing to get to our final round where they could win not only their body weight in Sprudmuckers Home Style Chunky Cottage Cheese but they could also take home this weeks jackpot from Gary the Gnomes Lucky Pot O'Gold. Don't forget, no one claimed the star prize last week when our round winner, 87 year old Doris Prunes, couldn't make it through our qualifying obstacle course. If only she hadn't have worn red in the bull run. So it's a rollover week folks! Let's follow the magic rainbow totaliser and see what this weeks jackpot is.....

.....That's right! 77 whole cents could be going home tonight with one of our contestants, and don't forget, that's tax free! Before we meet our players let's have a word from our sponsor.

We at Sprudmuckers have a dream, a simple dream of quality. A dream we want to share with you and your family. Take a look at this happy family, The Johnsons, sitting around the table enjoying a healthy round of sandwiches. There's dad now, Hugh Johnson, spreading the fresh, home made bread with a thick layer of "Sprudmuckers I Can't Believe it's Not Offal". We at Sprudmuckers use only the finest rejected ingredients shipped direct from our farm yards which are back working again now the forensics have been completed. Don't forget that all our products are vegan friendly and gluten free because even we don't know what goes in them but we are pretty sure none of it is natural. Our recipes have been handed down through the Sprudmucker family for generations, some of whom are now out on bail. So don't forget to go and buy your Sprudmuckers products today! Sprudmuckers - free from radiation since 1987.

Why don't we get straight to it and meet our contestants. Oscar and Emma Leroy, Davis Quinton and Wanda Dollard and finally Hank Yarbo and Lacey Burrows.

In our first round our teams will be shown a picture of a garden gnome and all they have to do is identify the name of the gnome. Sounds easy doesn't it but we have disguised the gnomes face to make it harder for them to be recognised. Without further ado here's our first picture - don't forget this round is against the clock. 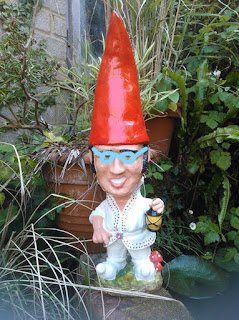 I'm sorry folks your 7 seconds is up! No takers, it's a hard one but no one spotted Elvis impersonator Neville Squits behind our clever disguise! No matter, here's the next one, don't forget to press those buzzers! 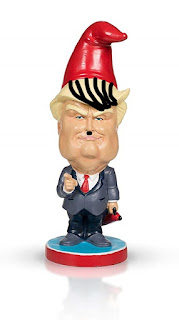 Ooooh no - Wanda almost got there that time. Of course this is that wacky bumbler, known for causing havoc where ever he goes. That's right, it's Oliver Hardy!

So far all our teams are level pegging with no points what so ever. I would have thought two of our teams would have done much better. They have a history as Dog River's top bar trivia teams. I have to say these guys can bicker! It's pretty darn hilarious here in the studio. Wanda if you could keep your answers simple you might get to that buzzer on time, we don't need the whole history of the gnome - just the name of the one in the picture. Lacey you may well have meant to say the answer but you gave the wrong one. Davis using your gut instinct, cop or no, is just another way to say you got lucky - but you still have to press the buzzer in time.

Now teams I heard that in your home town of Dog River, there has been a recent crime wave. Reports of Gnomes being stolen have had a staggering 100% increase compared to last year. Two whole gnomes have been missing from the garden of Oscar and Emma's next door neighbour for sometime now. So long in fact that she has had their pictures put on a milk carton. In tribute to these long lost ornaments we are about to play round two "Where's My Gnome At?" We are going to show you some photo's taken by our guest photographer Brent Leroy of Gary the Gnome on his holidays. All our teams have to do is tell us where Gary is at. 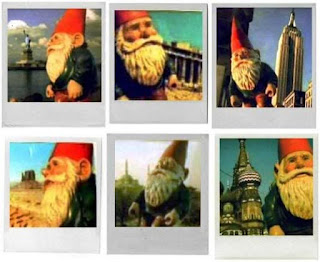 I am sorry folks we seem to have had technical difficulties, these must be photo's taken for a 1980's episode of Name That Gnome. Actually.....no....the producers tell me these are the pictures taken by Brent, he has been using the same cruddy Instamatic camera since he was 13 years old. Our researchers tell me he tried to upgrade to digital but couldn't get the hang of the new fangled simplicity of the gadget. All his friends seem to manage it..what is his problem! 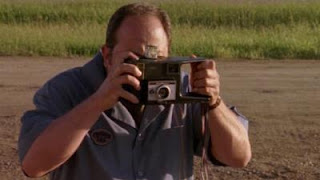 Those grainy pics didn't help things as the score is still zip plays zip to a straight nothing. So lets skip to the final sudden death round "Lookie Likey" First person to buzz in and tell me who this gnome looks like wins the grand prize. 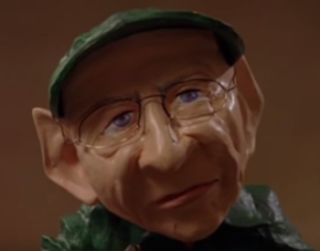 Oscar! You got their first but unfortunately "me" is not the answer I have on the card, the answer I have is "Oscar", I am sorry, so close! I understand this is the last known photo of one of the two missing Dog River gnomes. Rumour has it the Leroy family may have perpetrated the crime. However, surely confusion would reign in the household? The likeness to Oscar is uncanny, I would imagine Emma wouldn't know which is talking to her Gnome Oscar or "fleshy" Oscar. I wonder if the second missing item looks at all like another of the Dog River citizens?

I have been told our production office have just received an e-mail from viewer Sharon Gilbert-Bernard. She thinks someone could write a really funny sitcom episode revolving around our contestants and all their antics. In fact, she says that it would be so funny it would become her favourite episode of that show....should such a show be made.

Maybe having Brent Butt and Mark Farrell write the episode would be a good idea. Mr Farrell could direct it. There input would make for some really great zingers in the episode, particularly from Nancy Robertson who I think would be amazing as Wanda. Nancy would be on top form giving a effortless performance. The whole show though would be stolen by a wonderful Janet Wright who would be on top snippy form as Emma. She has to put up with Oscar and his baiting of a lawn ornament obsessed neighbour. The episode would be classic Brent Butt, who I find is at his best when writing put down quips, usually to his own characters detriment. The material would given plenty of sass by the cast.

However, this sitcom doesn't exist in the same universe as Name That Gnome, this is all speculative crazy talk.  It is almost as if the whole conversation has been fashioned to help shoe horn in some journalistic criticism element to a blog post by a writer trying to stretch the conceit of a game show without it being too jarring on the narrative. He may even put in a fourth wall breaking ahem in here. **Ahem**

We don't want all our contestants to go home empty handed so we are giving them each a gnome of their own. 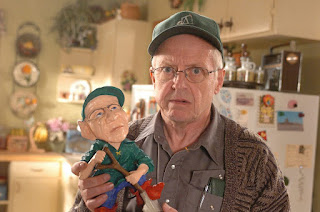 So folks that brings us to the end of another episode of "Name That Gnome"! We have no winners again so it's another role over next week. Someone has to win soon because the Sprudmuckers Cottage Cheese is starting to stink up the place something awful. I told them not to keep it by the radiator.

Until next time folks! Time to go Gnome!