Integrity. It is an important word, a valuable word, a word  I just learned to spell. Nowhere should this little word be more important than in the world of Journalism. Actually, it should also be important in a meeting discussing the structural needs of a Truss, Girdle or a pair of Spanx.

Unfortunately in the world of newspaper reporting this fact is often lost on it's writers. No other publication is a better example of this than Dog River's own The Howler. Look at the hatchet job they did on poor Lacey the moment she set foot in town. 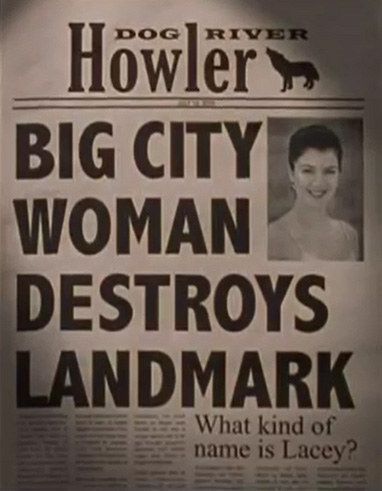 Obviously, in reporting that Lacey was refurbishing The Ruby they forgot the most important aspects of journalism:

1: Always remember to go out wearing a Trilby with a little card tucked in the band that says "Press" on it - especially if it is 1940

3: Fact check (Note to self: Check that this point is in fact a fact) 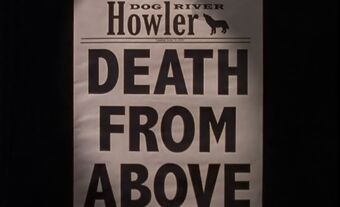 I was once a participant in flagrant misuse of power in my position of a work experience placement at a local radio station at the age of thirteen. I was young, keen and eager to set the world on fire with Pulitzer worthy reporting. Imagine Jimmy Olsen only with less bow ties and more freckles.  I got my big break when I was asked to cover the discovery of a very rare breed of snail in a local families back garden. I arranged for the gentleman in question to come to the studio with a specimen of said snails. He came, with a snail in a Tupperware box, and what unfolded was radio broadcasting gold!  Now as interesting as the chap that bought the snail in was* I needed, as a top professional journo type person, to get first hand evidence of the story from all persons involved. However, this proved particularly difficult. As you can imagine a snail isn't very talkative (unless there is a particularly interesting documentary on the telly about lettuce - then you can't shut them up). I held the mic as close as I could to that rotten snail** and it held true to form and didn't make a single sound.
Now, I am not at all proud of what I did next. I falsified evidence! When putting the the story together I blatantly, without any thought of the precious integrity I mentioned previously, EDITED IN CHEWING NOISES I MADE MYSELF USING A TOFFEE AND A SWIG OF TEA!!!! 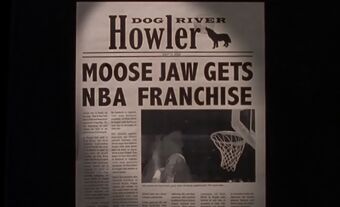 Now that is reporting Gus Tompkins, owner of The Howler, would be truly proud of. But that doesn't make it right. I am ashamed to say I have a few other stories that relate to my time with that little radio station. I intend to stretch the premise of this post to it's absolute limit - so I will save them for another day.

Unfortunately, the press today is full of terrible reporting, half truths, out and out fibs and all sorts. There are also lots of typos, layout errors and pictorial goofs that end up being gut bouncingly funny. In this series of posts I am going to pick out some of the best I can find in the first page of a google image search. Maybe we can all sit and read them and imagine we are in The Ruby and have in our hands the latest issue of The Howler. That would be fun right?***

Let's start with a belter. 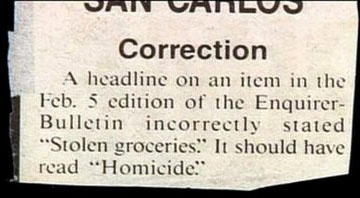 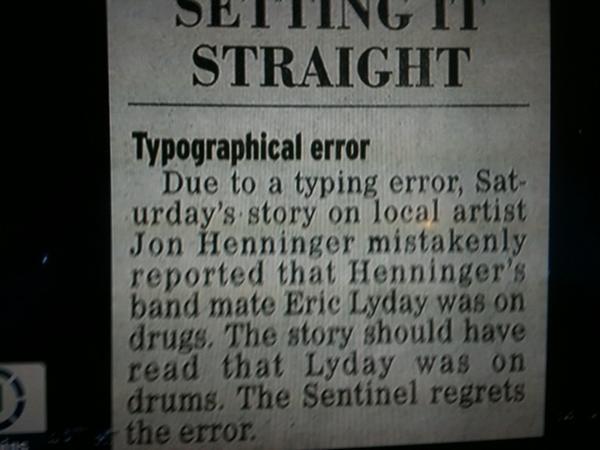 Have you seen these two hooligans? 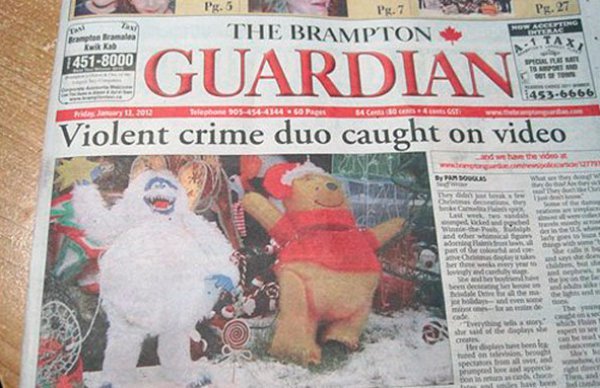 Mistake my foot. Who ever did this knew exactly what they were up to! 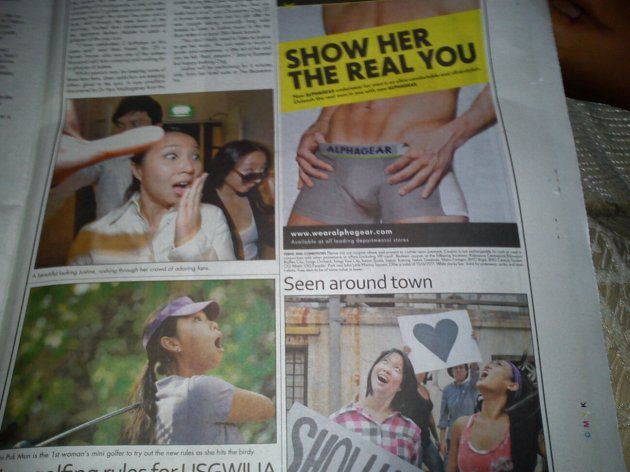 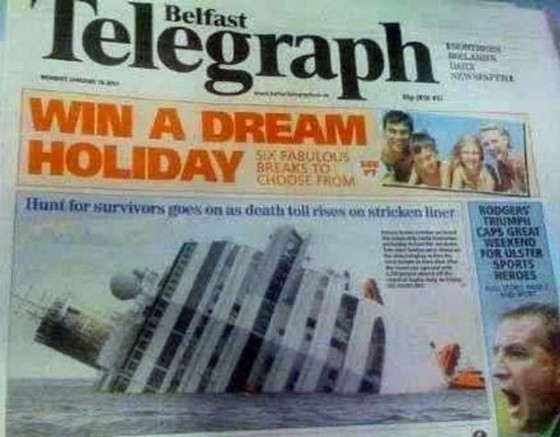 Well what we really meant was...

After much, expensive, research our Maths Nerds have worked out... 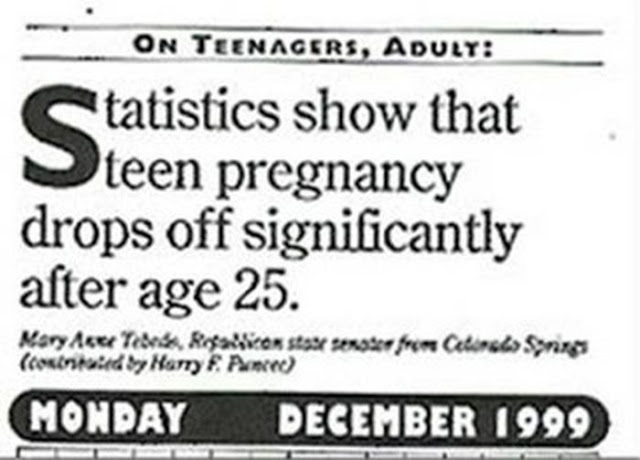 Naughty Nanna, to your bed! 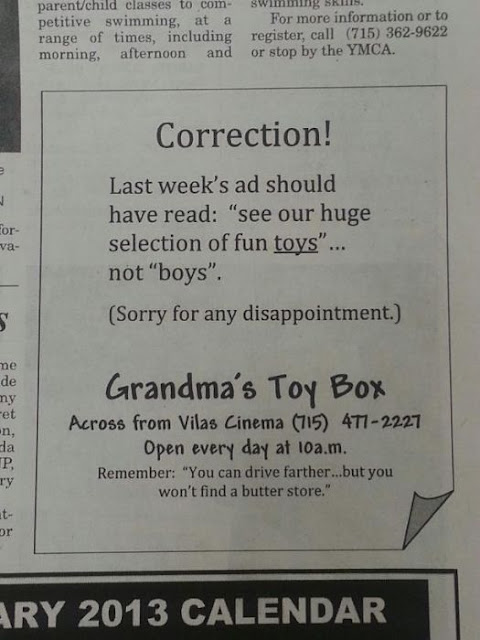 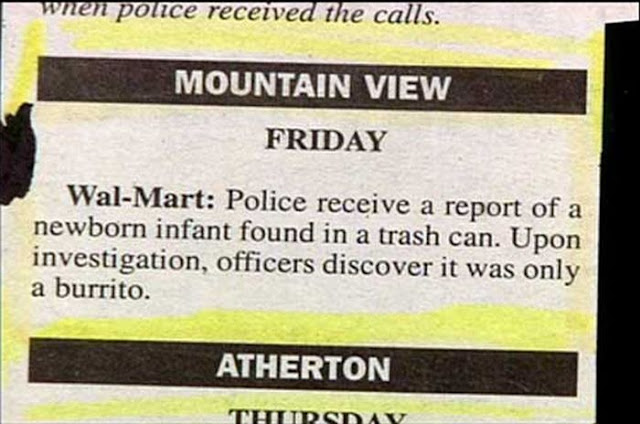 Now to end with here is a picture I found which is solid proof that fact checking is so crucial in the world of news reporting. This popped up in an article much the same as this one, reporting silly articles and adverts in newspapers. 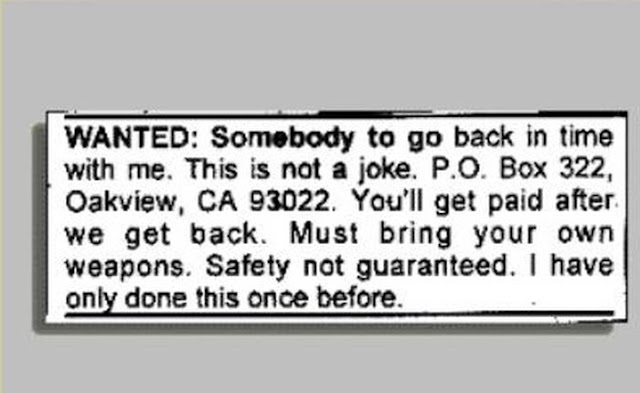 I immediately thought "Ha! I got a twofer (two for the price of one!) Being a movie geek I knew this was an add used in the fantastic independent movie "Safety Not Guaranteed" starring Mark Duplass and the bloke out of the new Star Wars movies.  I congratulated myself "Well done me and my superior motion picture knowledge that the person, or persons, putting this web page together obviously do not own. They thought this was a real silly ad and it is not." I went straight to the kitchen for my reward, a celebratory biscuit and cup of tea, as I am British after all.

Well I just checked and the ad was real and the movie was based on it. Just shows ta go ya. I now have to put back my biccy and have one less cup of tea tomorrow to make up for the extra one I had today that I apparently didn't deserve after all.

If you find a newspaper gaff or goof worthy of The Howler why not send it to me at any of the addresses on my contact page or leave it in the comments section below. I'll use it in a future post here at Corner Gas Fan Corner!