Within the Universe there are myriad mysteries yet to be solved by the worlds greatest minds.

Take the case of Neil Condiment. On his way to work, one bright summers morning, he required a sneeze. It's was an unusually large sneeze, that took Neil somewhat by surprise. He put his hand to his mouth to contain the germs, his mother Ethel Condiment bought him up well. However, when he took his hand away he found, so hard was the sneeze, his nose was suddenly three feet long and had a particularly bushy mustache on the end of it!

Of course there are well known mysteries such as The Loch Ness Monster and , Brent Butt's favourite, The Sasquatch. Every so often more evidence is unearthed by users of the interweb to prove the existence of these legendary beasts. None more compelling as a recent photograph that was posted on Instagram of Nessie and Sassie both sitting at the children's table at the Goldfarb Barmitzvah. Some have suggested that the photo is a forgery however in an interview with authorities Annie Goldfarb does mention that someone had helped themselves to more than their fair share of the Salmon En Croute that day.

Of course the biggest mysteries of all time is the real melon scratcher that is who is the father of Tanner Dollard, erstwhile son and full time hooligan of Wanda, our favourite vertically challenged Corner Gas employee.

Well we here at Fan Corner are on the case. Over a series of posts we shall examine the evidence available over the entire course of Corner Gas episodes (live action, not animated - animated characters aren't real like the live ones - silly!). One by one we will eliminate the suspects to end up with the answer to this 16 year old conundrum. So, like Karen Pelly, let us open the case files and put some dog river denizens under the magnifying glass.

Addressing them in order of appearance. 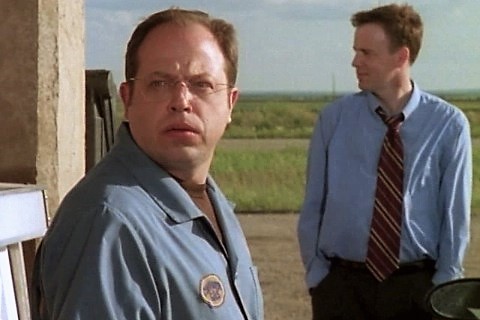 There is nothing more suspicious than someone you don't know, standing around, doing nothing untoward. It's always the quiet ones you have to watch as they say. Well, I put it to you, our first glance into the world of Dog River may have already introduced us to the father of Tanner. The chap that pulls in for gas. Simply look at the picture above, there is plenty of evidence to give him away.

Check out his relatively disheveled look, tie not done up correctly, shirt mostly tucked in. Not the look of a businessman more of a man just gone about his business! Yes, I am aware he has just got out of the car and has probably been driving for hours so he would look a bit scrunched up. However, this leads me to may second piece of evidence. Check out that little rye smile playing across his chops! What's he got to be so happy about. Hmmm.

Now this theory assumes that the episode takes place roughly nine months before the birth of Tanner. Well I can confirm, after much research, many conference calls and a flip of a coin, that I have no idea if it does or not. However, if we find a deleted scene in which Brent wonders why all the impulse buys have all fallen off the counter, I'm going to give you a big I told you so. 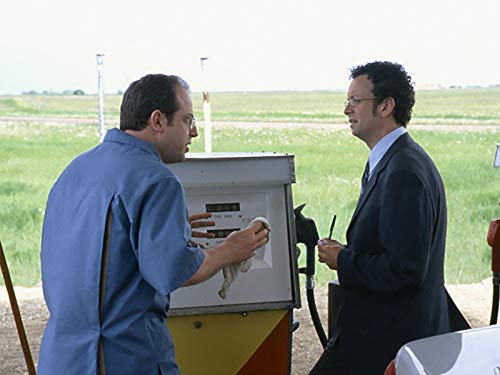 The (A) Taxman, rolls into town, again, all suited and booted. However, this time, not a bit of clothing out of place. Surely this lends more credence to my theory above. Well, seeing as we are playing fast and free with timelines here, I would surmise, during the events of Episode 2, Tanner has already been born for anything between two and twenty five years. SO, it would seem perfectly obvious to me the possibility is that old Marv here is not just in town to investigate Oscars tax returns. He is here to discuss child maintenance!!

We know he is a man of numbers, a bit of a whizz with the old adding and subtracting and keeping his books straight. Obviously he would want to make sure Wanda is happy that all payments have been taken care of and are up to date.

I put this photo through that handy dandy machine Harrison Ford uses in Blade Runner - you know - the one that lets you look round corners on a flat picture? Well, above, see Marv is holding a pen? Apparently, according to the Round-a-Corner-o-Scope 3000 he is writing a note that says "Wanda - I.O.U. $50" 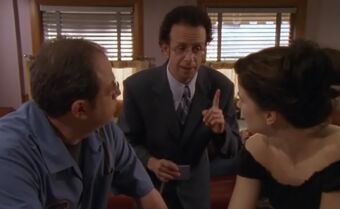 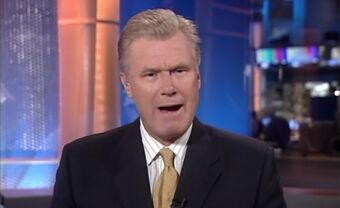 Now being an English person, I have absolutely no idea who Dan Matheson is. I would assume he reads the news on the television in Canada and, judging by the picture here, has no teeth.

I can hear you already. "Ian, how in the name of sweet maple syrup, could ol' Danny be Tanners father?"

If you remember Willy invented a television that could have you pick out of it anything you like from the screen and have it as your own. Maybe Wanda owns one and fancied a bit of Dan as her own!

"Ian, the Wonkavision telly doesn't exsist." It does too! I have a receipt here from Best Buy for one Blade Runner Round-A-Corner-O-Rama 3000 and one Wonkavision Wonky-O-Scope right here. All requests to see it maybe made via my legal representatives at "Dodgy Ken's Legal Advisory Service, 3rd Dustbin on the Left, The Alley Behind The Lamb and Flag Pub, East Cheam". 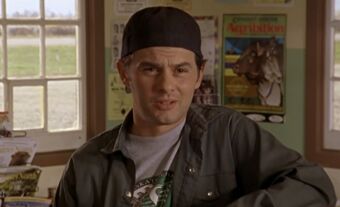 Don't be so daft!

So, who do you think may be Tanner's Daddy? Any of the above? Do you have theories of your own. Any ideas what Tanner may look like? Let me know what your theories are. Send me pictures of Tanner you may fancy photoshopping. We will be coming back to this fascinating whodunnit very soon

Do you know how much it costs to get a round the corner photo developed by the way! Pure extortion!