The Complete and Utter History of Corner Gas Animated...so far

Last week my cable provider sent me a new set top box. It's apparently very whizzy and has various flashing lights on it and connections on the back with important sounding letters printed above them. I have no idea what those letters mean but if you put the right wires in them they let you watch nearly 415 channels of televisual excitement. Hours and hours of content on every subject, of every genre. In any given twenty four hour period there are more programmes to watch than you could possibly fit into a lifetime. That is before you factor in catch up, plus one and sports services and all the movie channels and box sets. Then how is it, with all this choice, super high speed connections and technology available with just a press of a button that every night my wife and I spend more time flicking through with the remote past hundreds of programmes only to decide that it's all rubbish and there is nothing on!

I am sure that a lot of you have the same problem. However, fear not, in some regions the pain will be taken away and the choice will be a simple one, as on April 2nd The Comedy Network will premiere the long awaited first season of Corner Gas: Animated!

If you have been following the production of the show you will know it has been largely quiet until February then it all went a bit mad. There has been a lot dropped by the Corner Gas team all over the internet over the last few weeks. Luckily we (me) at Fan Corner have been pottering around all over the web collecting up all the details we (I) could find relating to the upcoming release so you have everything in one handy dandy place. You're welcome!

Let's go right back to the beginning. 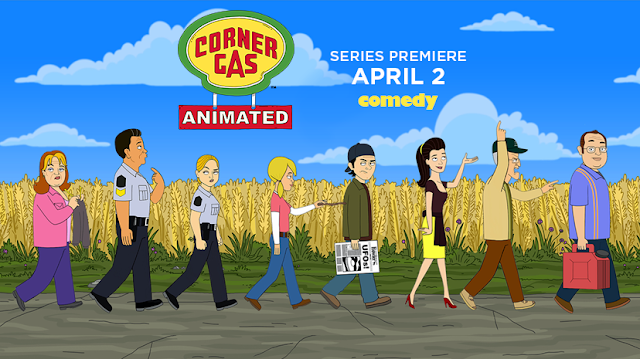 The idea for the animated series was actually conceived during the filming of the original live action show. Brent Butt and his fellow producers spoke about doing an animated special but it was purely an idea that did not get used. Five years after the show ended it's run the gang came back with Corner Gas: The Movie which was phenomenally successful proving there was still gas in the tank (see what I did there!) for the format. The television network asked if Brent and his crew were interested in doing more t.v. episodes.

Brent did not want to revisit the show as it was, although interest would be there if they could do something that was noticeably different. So they went back to the idea of an adult animated show. The network was intrigued and the deal was done to go into development.

There was still an element of doubt in Brent's mind that this was the right path for the show. To see if it could work, a three minute demo reel was produced (Yes, I want to see it too, #dvdextras). Brent also wrote some scripts that everyone loved and soon he new show was put into full production.

Corner Gas fans were oblivious that the new project was on the way. In December 2016, Brent dropped a little tease on twitter noting that he was feeling "a little animated." Soon after a teaser trailer dropped, causing much excitement among the fan community.


In January 2017 production stepped up a gear. All original cast members were back. They and members of the production crew started tweeting pictures from the recording studio.

Day 1 of voice record for #CornerGasAnimated! (Which these goofs seem to think is a musical.) pic.twitter.com/jnNVQdSpIL
— Brent Butt (@BrentButt) January 11, 2017

Voice recording was taking place simultaneously in Vancouver and Toronto. The main members of the cast are split between the two cities but were joined by direct audio link so they could all react to each others performance as if they were all in the same room. The wonders of modern technology! Direction for the actors vocal performances came from series stalwart David Storey

It was announced that actress Corrine Koslo would be replacing Janet Wright as the voice of Emma Leroy on the project. Janet, sadly, passed away in November 2016 when the new series was well into pre-production. Janet's family were only happy to give their blessing for the show to continue and suggested Corrine would be perfect to take over the part of Emma. Corrine and Janet had been friends for many years and vocally happened to be very similar. 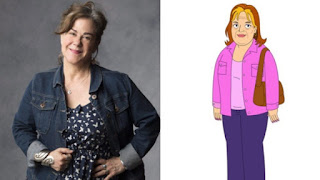 The announcement in the media often featured the above image, featuring cartoon Emma. It was the first to be public with exception to the following background image and a close up of Brent. 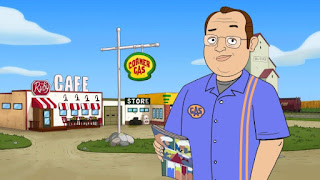 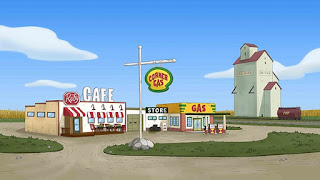 Meanwhile animation duties were taking place for the thirteen episode season at Smiley Guy Studios, under the direction of Todd Kaufman and Mark Thornton. Smiley Guy is well known for being involved in many high profile projects including The Kids in the Hall series Death Come to Town for which they created the main title sequence and special visual effects.

All went quiet for some time, very little information came after the initial excitement. There were the occasional tweet , like this from March -

Then out of the blue, in July, more background drawings of some familiar Dog River sites emerged. Brent let us know it is all coming together. Indeed it was! 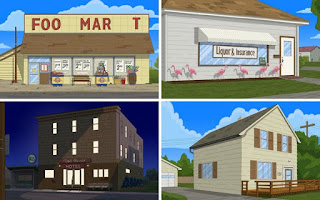 A month later, as part of his Buttpod series of vlogs, Brent shared a behind the scenes sneek peek of more recording studio shenanigans. This was the first place, all be it for the eagle eyed viewer, that we got to see some actual footage from the show in, rough, animatic form (keep an eye on David Storey's laptop).

The Buttpod was the only place that fans could get meager portions of Animated goodness . September Brent threw caution to the wind so we could get a quick, 4.8 second, hit.

October came and went and, as we grew tired of watching the 4.8 seconds for the umpteenth time Brent came to our rescue again. No more footage, but we did get see what the new Corner Gas logo was going to look like whilst the cast and crew celebrated the near conclusion of production with a screening in Toronto.

All quiet again with the odd seasonal greeting popping up for good measure.

However, it was the proverbial calm before the storm. On February 4th 2018 the flood gates were opened. A well placed 15 seconds during CTV's broadcast of the Superbowl finally hearalded the premiere date of the first season, previously talked up as being January 2018.

Cast and crew really hit social media hard to let everybody know that the promo was coming. The advert came and went and many of the fan-base assumed that was all they were going to get until April 2nd. However, another clip snuck out without the media hub-bub only hours later, another advert, this time longer and highlighting a Mad Max parody.


To tie in with official announcement www.cornergas.com had a pretty make over. It features links to a show history, episode details, Brent Butt tour information and much more. The site even sees the welcome return of the popular Perfect Pump game.

The Comedy Network has also added a Corner Gas: Animated page to it's website but has yet to be populated with anything other than a link to the Mad Max promo. 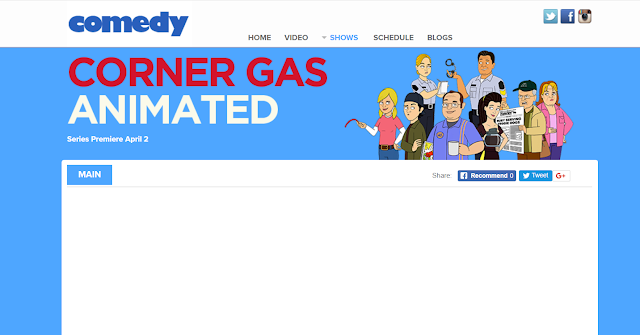 In recent weeks more and more artwork featuring the denizens of Dog River have emerged. Pictures used as holiday wishes, screen captures from the ads and even a shout out for Team Canada at the winter olympics have popped up on Facebook, Twitter and Instagram. 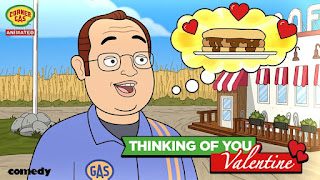 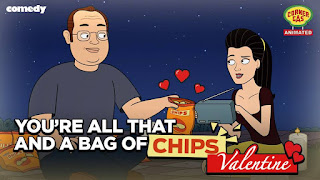 Details of how the show will play out have started to find there way into interviews. It is almost a re-imagining of it's original, live action sibling. It will have much the same format, however the animation will allow the fantasy elements, or the swoosh cuts as we like to call them, to be more over the top and not anchored to awkward things like physics that can often get in the way of a good joke. When recently interviewed the series producers had this to say -

"Brent thinks in pictures and doodles. When he created Corner Gas the sitcom, he and the team were always coming up with ideas that were funny, but would kneecap the show's live action reality...and laws of physics. With Corner Gas Animated, Brent and the team have more leeway in the stories they can tell. If one of our characters needs to be on the moon fighting a dragon with a wiffle bat to make the joke work, Corner Gas Animated can do it. The animated series can flaunt the laws of physics, nature and man, without ever damaging our reality. It's so perfect - maintaining our authenticity, while doing whatever we want" 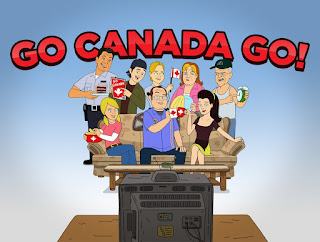 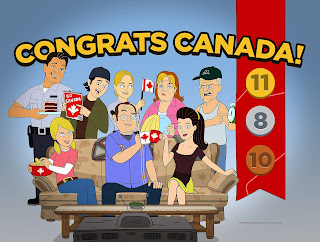 "[Animation] fits into what people expect of 'Corner Gas' but we just have a little bit of wiggle room to go a little farther now. We will see a sasquatch and a unicorn fight. We would not likely have been able to do that in the real world, especially as graphically violent as we did in the animated world. In another episode, Fred Ewanuick's character Hank imagines himself on a pirate ship with Brent, who is holding a lightsaber!"

The goal of the new season is to match the quality of it's U.S. counterparts such as Bob's Burgers and The Simpsons. Proceedings, like the original series, will be clean and not head off into the realms of Family Guy and American Dad.

Brent also hints that there is a guest appearance in one of the episodes. Those of you with a good memory might have a wild stab at guessing that the celeb he is talking about is singer Sarah McLachlan, who featured in a few tweets back in June.

Finally a quick peek at IMDB also tells us the title of episode one "Bone Dry", which if we link this to the gag in one of the promo's may suggest that this where the Mad Max scene will tie in. IMDB also offers up additional casting, along with character names and writing credits.

The run up to April 2nd is being preceded on The Comedy Network by a marathon of classic Corner Gas episodes, weekdays from 7am. The network is even making their service free of charge from March 20th until April 7th to ensure everyone get's their fill of Dog River goodness. 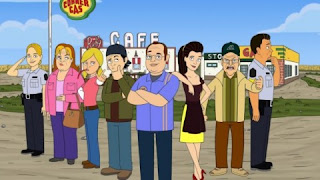 So there we have it, all up to date. I think that is absolutely everything. Work has already begun on scripts for Season 2, getting ahead of the game as it has not been given the green light just yet. To make sure it happens make sure you all are tuned into The Comedy Network on April 2nd at 8pm. If you miss it you're a ... 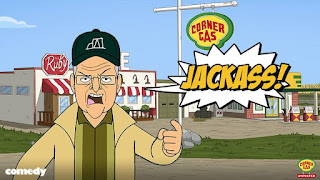 I will leave you with a last word from Brent which I think sums up how we all feel very nicely.
"I'm excited! Comic books, cartoons, and drawing have always been in my DNA. The original series really lends itself to being animated. The humour, the warmth, the antics and cast have all found their way into the new animated show. It feels like CORNER GAS and I couldn't be happier. I can't wait to unveil CORNER GAS ANIMATED. Tune in Easter Monday!"

With thanks to Michele Sponagle who is completely awesome.
Posted by Ian Richards