An Evening with The Steven Page Trio

The year is 1993. Every Saturday night myself and three of my closest chums would cruise to Portsmouth. Two of us, with freshly minted licences, would take turns driving, whose turn it was determined by whose mum was feeling brave enough to give lends of her car to a bunch of spotty adolescents.

We would be off to the then brand new, and somewhat trendy, Port Solent complex with a mind of popping to the pub and wooing ladies, the theory being that said ladies would be so impressed that we had arrived in our own car that they would become very keen to rub their lips on our faces and fall helplessly in love with us. Despite all the spots.

The problem being, nine times out of ten we would arrive at Portsmouth's hottest venue in my mate Nick's mum's Citroen 2CV, a car designed to be driven by french farmers over french farmers fields which were probably full of potatoes. Never before was there an automobile that was so lacking in sex appeal. To drive it required the mastery of what seemed to be a complex lever and pulley system that needed a science degree to fathom. It had more knobs and buttons to get it to go than the Batmobile, sadly none of which seemed to trigger an ejector seat. 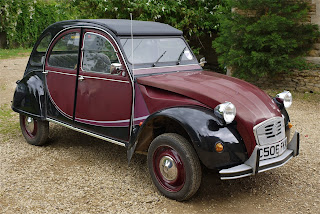 The car's saving grace was it did have a cassette tape player. For younger readers, tapes were MP3's on a long bit of thin, brown plastic that used to get chewed up in the machine a lot and you had to use a Biro to wind back into it's container, which would take roughly twenty minutes to do and when you finally got it back in you would discover the tape has magically twisted over itself in the middle never to be put straight again.

We had a choice of two tapes to play. Nick's mum's Best of Bacarra, a Scandinavian Abba knock off band who had a hit with "Yes Sir I Can Boogie" a song that falls in the so bad it's good category mainly due to lyrics like "Our love is dynamite, have you got a light?"! The other tape was bought back by Nick from his recent Canadian holiday by a band called Barenaked Ladies.

The album, entitled Gordon, was a wonder! Full of catchy, bouncy pop tunes, endlessly hummable and full of cheeky humour that had us hooked from the first play. Until the tape chewed up and we had wait until were old enough to apply for a mortgage so we could afford an imported copy of the album on a new invention called a Compact Disc, which for younger readers are shiny, metal, circular MP3's.

Fast foward, like an old cassette tape, to 2017. I have followed Barenaked Ladies ever since those tender teenage years over twenty years ago. In that time one of the bands founder members, creative force and lead singer, Steven Page, had left the band and gone solo. Tonight he is playing a gig at The Wedgewood Rooms, Southsea just stones throw from Port Solent where I discovered him, sitting in the back of my mates mum's car all those years ago.

If the fact that this is the first time that Steven has toured the UK in ten years, and that I live only twenty minutes away from one of the venues, wasn't exciting enough he has bought with him Craig Northey, front man of legendary band The Odds and composer of Not A lot Going On and Happy Place, opening and closing themes from Corner Gas! Wait, It get's better! Rounding out The Steven Page Trio is the outstandingly talented and wearer of glasses Kevin Fox, cellist extraordinaire!


The trio perform a solid, high energy, two hour show. The set list covers Steven's back catalogue of crowd pleasing hits but concentrates on his latest work from his recent releases Page One and Heal Thyself: Part One - Instinct.

The new albums, which feature tracks co-written by Craig Northey, have a sound recognisable to 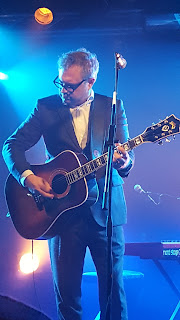 anyone who is a fan of Steven's work with Barenaked Ladies but also feature a distinct departure into new grounds. The tracks are again catchy pop tunes, however with a complexity in their arrangement and subject matter which show how Page has grown as an artist since his break with BNL. Heal Thyself features songs with nods towards everything from 80's electronic pop to reggae. Lyrically both albums are very introspective with Page exploring areas of his life and his career from the point of view of a man who has gone through many changes over the last ten years.

When I read that the UK concert would feature a trio, my first thought was how are these huge songs from the album going to translate to a small band. Such is the skill and presence of these three hard working troubadours, the sound they create in the intimate setting of smaller venues is huge. Points of the show would have you believe there are dozen more band members on stage performing. Again, it is the strength of the arrangements made by the guys and the compatibility of their voices and clever use of their instruments that create amazing stripped down versions of the album tracks. The camaraderie these chaps share, obviously drawn from many years working together on various projects, is obvious and makes the show a very easy enjoyable watch. All three are very witty, often stopping to chat and joke with each other. Banter that is also enjoyable to a point that you would quite happily enjoy two hours of listening to them talk and lark about. Maybe, Steven Page: The Stand Up Years are just around the corner. 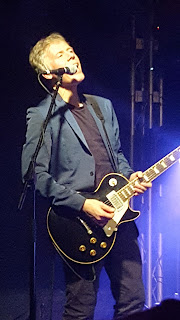 Craig Northey, on guitar, is fantastic to watch live. I found him a very understated, laid back guitarist. His fret work confidently drives the songs along behind Steven's legendary voice. Craig provides some lovely solos, particularly enjoyable when he broke out his slide. As a guitarist myself, I find slide guitar fascinating as I can never get the hang of it, when I try I make sounds not dissimilar to ones a cat would make if it got it's tail caught in the hoover. 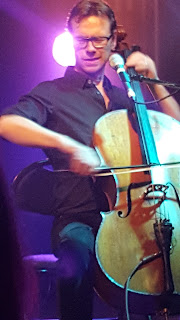 Kevin Fox's Celloing brings almost sublime depth to each composition. He has created a beautiful tone with his instrument and just a few electric gadgets. The warmth from each note he plays with obvious passion add a unique style to proceedings which would make you wonder why we haven't heard more cello in the pop charts of recent. It is also worth noting that guitarists have long cornered the market for making "faces" whilst playing. The impassioned gurning that Kevin displays whilst playing a particularly tricky refrain could well garner him some major awards.

The guys were also joined on stage by Liam McKinnon on a box, drummy sort of a thing. Liam runs the very awesome www.getbarenaked.net which I highly recommend you visit for all your Barenaked Ladies news requirements.

Show highlights, from the new material, were fantastic renditions of
New Shore, Linda Ronstadt in the 70's and my personal favourite No Song Left To Save Me. BNL hits that really got the crowd going were Old Apartment, Jane and Brian Wilson.

At time of writing the next show is in London. If you have a chance please head to www.stevenpage.com where you can find links to buy tickets for the last run of shows. Hurry as they are selling fast and the first Glasgow gig is already sold out. Go and support this great set of musicians and hopefully it won't be ten years before they come back again.