We all have favourites. You may have a favourite drink, band or pair of underpants. Sometimes the favouritism placed on these items can elevate them to "lucky" status especially in the underpants department, but that is a detail for other, more specialist web sites. The choice we have to make is whether to share these special treats with the rest of the world. If we share them with others will this dilute how special they are? Sometimes when those closely guarded units of joy get taken by the masses your enthusiasm wains and you start looking for something else to treasure. An argument can be made for keeping them secret so it's your thing, a gem to be savoured by you and only you. Look at all that kerfuffle in Middle Earth over a bit of jewelry for example. Underpants should definitely be kept to yourself....well maybe share them with your dry cleaner from time to time


Being from the UK there are very few people over here that know about my favourite t.v. show as it has never been broadcast in this green and pleasant land. I did find myself thinking that maybe I should keep Dog River to myself, my special little televisual secret. I chose to be altruistic and share with this here site o'mine. It was the right choice as I have come into contact with lot of like minded people from around the world. I have been contacted by frustrated fans of the show from various countries who have struggled to see Corner Gas as part of their regular scheduled programming.

One such person is Charles Culbertson from Virginia, U.S.A. Charles is a huge Corner Gas fan and has also tried to share the love with friends and relatives in his area of the world. He, like myself, is met with blank faces, shrugs and general indifference when explaining what the show is about to friends and acquaintances.

He tells me Buzz Driver, Episode Seven from Season Five, is his all time favourite episode which he feels comes "pretty darned close to comedic perfection." Strong praise indeed which is why I have afforded the words parentheses (actually it was because it is a direct quote but they still help to add an air of gravitas don't you feel?) The reason Charles enjoyed the episode so much is the interaction of all the story lines and action that the episode holds.

Charles is obviously a man of great taste. Buzz Driver is a true classic. However, it should not be confused with Edgar Wright's recent opus Baby Driver, which although is an amazing film could well have been enhanced if Oscar Leroy was in charge of the getaway car.

The episode opens strong with excellent pre-credits banter between Davis and Karen. Karen accuses Davis of slamming the draws shut on the filing cabinet like King Kong or Godzilla, causing the drawers to get stuck. Davis ponders on what either of the two behemoth monsters would do to a filing cabinet. In freeing the stuck cabinet drawer Karen accidentally belts Davis in the jaw and he drops like a sack of spuds. At Corner Gas Brent and Wanda are discussing energy drinks of which Wanda believes the ingredients to be a load of hooey and have no scientific basis to prove that they will in fact boost your energy upon consumption. Meanwhile, at the Leroy household, Emma needs chores done around the house but, luckily for Oscar he has been chosen, due to a horrific admin error, to fill in for the sick school bus driver. Hank is trying to get Lacey and Brent to advertise on a board strapped to the back of his truck. 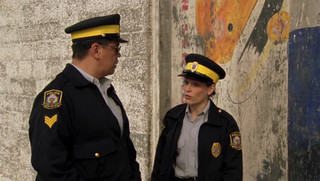 So there we have the set up for the story lines weaving through the episode. There is a lot to get through and with so much going on it would be easy to run out of air time to squeeze in important things like jokes for all the exposition that needs to take place. However, the script, written by Brent Butt, is extremely deft and all set up's have excellent pay off's. The episode also contains some fantastic one liners and dialogue that will give you a chuckle when you recall watching the show in slow moments during the next day at work.

Do you do that by the way? Laugh out loud, without realising, at things you are thinking about at your desk, when your mind wanders during a more tedious moments of your day in the office? Then the person at the desk opposite you asks what you are laughing about and you have to explain. The thing that you are explaining then becomes the least funny thing in the known universe and your colleague has to muster up a half hearted smirk to make you feel like the whole conversation wasn't an entire waste of time but is obviously thinking that you are a complete nut job that may need keeping a closer eye on in case you suddenly go postal and attack the nearest work experience person with a sellotape dispenser. No....just me? Thought so. Sorry, I digress.

Along with the great script everything is kept nicely in control by director Robert de Lint who makes sure the plots give each other enough room and also coaxes some fantastic performances from the cast. 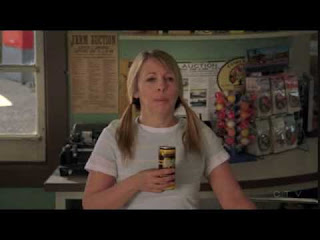 Certain long running shows are keen to give individual characters the lion's share of any given episode in a season. For example quite often Family Guy will do a Stewie and Brian episode or Frasier a Niles and Daphne story. Corner Gas never seems to do this. However, Buzz Driver comes close as it would be fairly easy to call this an Oscar and Wanda episode. 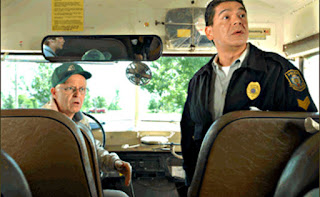 This is mainly due to the fantastic performances given by Eric Peterson and Nancy Robertson who both knock it out of the park. They both are obviously having a great time with the material. Wanda, who develops a teeny addiction to Haywire energy drink only to have her sudden new found energy and enthusiasm exploited by Emma and Brent, is given some more absurd situations and punchlines. Nancy has a chance to showcase her stellar comedy chops. Eric get's a chance to put Oscar in charge, relishing his new found power keeping control of the punks on the school bus and also managing to cause havoc to Dog River's traffic at the same time. 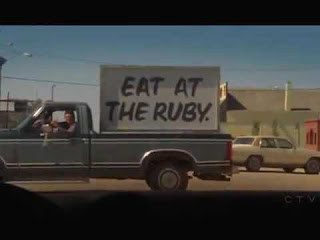 Oscar isn't the only one causing traffic trouble. Hank out in his truck promoting The Ruby with his truck sized sandwich board. His somewhat agressive sales technique causes the DRPD demand that Lacey does something about it. Her solution, or Brent's to be more accurate, somewhat exacerbates the problem.

Busy times for Davis and Kelly too but what a time to have a sudden rush of police business to attend to when Davis and his glass jaw have Karen worried that he won't be able to back her up when the shiz gets real, as I believe is the parlance on the streetz by the kidz. The reliable double act of Lorne Cardinal and Tara Spencer-Nairn have a story line that threads the rest together with a laugh out loud pay off.

The finale of the episode turns the whole thing into a kind of big reveal that you would expect in who done it style thriller. There has been a puppet master behind all the shenanigans. Who is it that has been profiting from everybody's exploits? 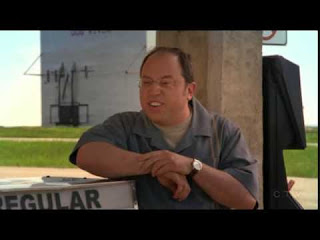 So as a thank you for his choice Charles receives a certificate commemorating his entry into "By Popular Demand" pantheon. Buzz Driver will also be highlighted as highly recommended with Charles' name against it in our Episode Guide section.

If you would like your all time bestest episode of Corner Gas to be included in an up coming post you can contact me at any of the addresses on our contact page. Go into as little or as much detail as you like. Your personal information will not be shared and your name only used with your permission. For your efforts you will receive, by e-mail, a certificate for you to print out and stick on the fridge or a passing loved one. I hope to hear from you soon! In the mean time I need to get these undies to the dry cleaner.