The problem is, by definition a fan site would not exist if the writer didn't think that his chosen muse is the mutts nuts, the bees knees or the cats pajamas.

While we are on the subject, who invented the animal kingdom scale of appreciation? How did they choose which part of the animal is the best bit that it could be used to define awesomeness? I think it is a flawed system that needs rethinking. Bee's knees are no doubt very impressive but I would imagine, like humans, they must get the odd excessively knobbly one that skews the value of greatness imbued to them.

Anyway, I digress. The point being there is very rarely going to be a poor review on a site such as this. So, how do you get around this problem when you genuinely want to recommend a fantastic piece of work without your readership saying out loud to their I-pads "Well yeeeaaaah...but you would say that wouldn't you!"  This is the predicament I find myself in when wanting to tell you all about "Coming Home" the first full album by regular Corner Gas director and all round good egg David Storey. This album is phenomenally good, in fact good doesn't do it justice. Stellar, sublime, amazeballs all just about sum up the brilliance of the work contained within it's eco friendly cardboard sleeve. Believe me, this is a record you really must have in your collection. I'll get to justifying my reasoning in a while. 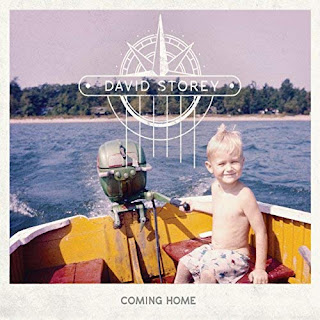 I had heard a little of David's music on You Tube, and found in the few videos I saw that his music seem to wobble on the top of the musical fence not quite falling either to the folk or the blues side. I wasn't sure what to expect when I put Coming Home in the stereo to play. It didn't take long to confirm we were firmly in folk territory here. Folk and Country music often leave me cold in the recorded format. Admittedly, live Folk is a different matter. A folk band showing up to a pub and ramping up the fiddle can often be just what you need to complement your pint and beer nuts and get your Tootsies shaking on the dance floor. I would never choose to go and buy a folk album on purpose, it's just not my thing, or "thang" as the Folkies would have it. I was starting to be a tad concerned that I wouldn't find anything to like and would have to make up some fibs here in my write up as to not hurt anyone's feelings. Also, this time of year, Santa is watching and fibs can get a boy on the naughty list.

I needn't have worried.I have owned the album for the best part of a month now and have listened to little else. It's nine tracks alternate between foot tapping and melancholy but all share an effortless story telling in their lyrics. Often the tales are obviously personal ones of relationships, growing old, a love for home and country, they create powerful imagery that will instigate a range of emotions. As you may expect some of the songs are extremely humorous as you would imagine from someone who has masterfully conducted the goings on in Dog River for so many years. In particular "Greatest" will raise a smile in a ballad recounting life long friendship and some of the shenanigans that best friends will get themselves into.


A reoccurring theme is that of a love for the simple things in life, opening track "Last Loon on the Lake" brings the delights of summers gone with it. It is hard not to the imagine the idyllic scenery the song describes, a place that is hard to leave as are the good times that have come within it. Featuring trio Traditionally Wound, the arrangement features Mandolin from Nick Macdonald, Bass by Sheldon Speedie and Violinist Wayne Ferguson who also appear on two other tracks, "Crusty" and "The Greatest". The band as a whole are as tight as can be, extremely laid back which is a nice counter point to David's vocals which feature just a hint of intensity and gravel.


Again humour abounds in "Crusty" along with a healthy dose of rebellion. I did have a little problem with one of the lyrics on the track. The story is of someone growing old and is going to keep on fighting with a will to carry on enjoying life no matter what. David sings "I'm Crusty and I'm Chuff" and here is were I had a translation issue. Here in England a Chuff is slang for a botty burp, a trouser cough, a bout of rousing flatulence that demands a standing ovation by all who were party to the incident. So on first listen I assumed the lyric meant "I am getting a bit old and suffering from gastro-intestinal health issues". I was wrong, Chuff means "ill-tempered" and is a term that came to life in the south of England..where I live! I feel my lack of knowledge is a telling indictment to our education system over here, either that or shows where my go to place is when looking for an easy joke.

** "23/11/18 AMENDMENT - The editors have been reliably informed by a Mr. D.Storey Esq the lyric mentioned above is in fact "I'm crusty and I'm tough". Tough makes much more sense than chuff! I have since had my ears syringed and I can confirm that I misheard the song. I apologise for any confusion this has caused. However, I do not wish to delete the above paragraph because a good fart joke is a good fart joke at the end of the day and deserves to be read even if it is born of factual inaccuracies. I have also been contacted by a Mr. J. Hendrix who tells me the actual lyric is "Excuse me while I kiss the sky" not "..this guy" **

The third track "Saint Adelaide" slows proceedings down with a tale of hope and faith. This, as are all the songs, is skillfully arranged. My favourite track "I Can't Complain" has harmonies that bring the hairs up on your neck. The tune has lyrics that juxtapose rough times with good ones, a message that we could all learn a lot from. Yeah we've had it rough, but not as rough as some and all in all things ain't that bad really. "Sea to Sky" follows a similar sound with soaring vocals which are nicely under scored by a tight engine room of Stephane McAlear on Drums and Bazil Donovan on Bass Guitar. It also features some understated keyboard work from Lawrie Ingles. Both these tracks invoke a sound that reminds me of some of the college rock bands of the 90's such as Crash Test Dummies and Hootie and the Blowfish.

After a mid section with a sturdy backbone the third act slows down a touch with some gentle, thought provoking songs. "Time, Truth, Trust" and "Hymn #1" both bring to the fore the lilting backing vocals and violin of Ann Lindsay. These songs also make you realise what a accomplished guitar player David is as the slower pace allows his finger picking style room the breath and round out a beautiful sound. This is also evident in the soothing finale with the title track "Coming Home" a short ode to traveling to the ends of the earth, adventures, battles won and lost and the joys of returning to the place and the person you love the most.

So, if you need verification that this little review doesn't just come from a place of fandom, here it is. I am extremely blinkered when it comes to music. I have a very sensitive ear, certain sounds go through me like a dodgy kebab through a drunk. I have been a musician myself for thirty years and a devotee to the Blues for twenty eight of those. Before then, the Huey Lewis years, we don't mention outside of therapy sessions. Occasionally I will hear a track or an album that will make me realise how important it is to give different sounds a fair go before dismissing them out right. Coming Home is one of those gems that I could have missed and hours of listening pleasure would have been lost to my little British lug holes.

I wholly recommend that you put the album on your Christmas list and maybe buy it as a stocking filler for your friends and family too. It is available at the links that follow. David has a new album to be released in January and is performing around Canada to promote, please keep coming back to Corner Gas Fan Corner where I will bring you regular updates on where to go to shake a tootsie or two with David and his band.

Please visit www.davidstoreymusic.com for more information and to download "Coming Home" and his EP "Movin' On".