It's Sunday morning. I am sitting in my kitchen looking out of the patio doors at my English countryside setting. In the distance I can hear the birds playing in the trees, their singing occasionally broken by the call of a group of seagulls as they float through the bright blue sky with more grace than their cumbersome size should allow. There is not a cloud to be seen, less to stop the bright sun beating a path to the lush green, grass of my modest lawn. A gentle breeze blows through the early blooming daffodils that dance slowly to tune created by nature that only they can hear. I heed the call of the beauty of the scene as I feel the need to embrace it's siren song before it ebbs into twilight mist. I stride out of my door and breathe in a chestful of the crisp morning air. As it often does, only too soon, the beauty fades as the early morning quietness is broken as I shout "Holy Hell it's cold!" and run back in where all the central heating is at.

Not A Lot Goin' On - Corner Gas Animated Special

Well folks, we have all waited patiently for days, months, years and finally we need wait no longer! Tonight the pressure is released, anxiety is washed away and excitement replaces them as tonight was very special. Tonight, we finally got to see the trailer for Solo: A Star Wars Movie and it looks way better than the whole of The Last Jedi did. Phew....that's a weight off and no mistake.

If you were lucky enough to be watching the telly for the correct 15 seconds on CTV during the latest Superbowl you also got to see a teaser trailer for Corner Gas:Animated!!! Corner Gas fan's across Canada tuned in to the channel who weren't even interested in game, they sat glued waiting for television history to be made. No doubt just before the moment arrived they thought they were safe to pop to the toilet for a second and missed the whole darned thing.

Brent Butt: 30 Years A Stand Up

Standing in the tiny, dimly lit corridor that runs behind the stage from the dressing room, one of the nights comedians stands waiting for the M.C. to announce his name. Just behind him is the dressing room, full of professional comedians all waiting to see how the new guy is going to do, not expecting much more than failure. It is open mic night, and they have seen hundreds of new comers die a horrible death on this stage and many others like it, all over the country. The first of the two open mic acts went on twenty minutes before, his performance taken from his drama school final exam entry met with icy silence, save a soul voice from the back of the room that advised that the fledgling comic's taxi has arrived. That chaps failure only adds to the tension welling in the second acts stomach as he stands there, in among the electric cables, dust and mice. He starts breathing deeply, nerves suddenly get the better of him as he searches his brain for his opening gag which has disappeared from his memory, despite being repeated over and over as he traveled up to the gig.

"Ladies and gentlemen, it's his first time at The Comedy Store, please welcome...." 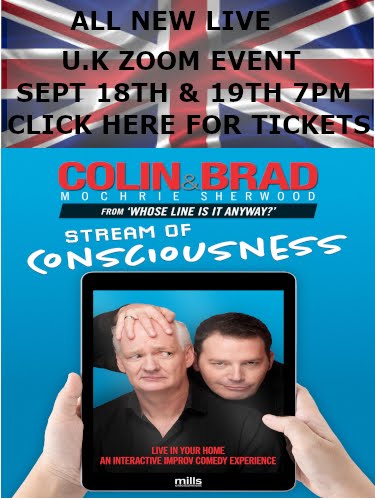