So as we start making this years preparations I should be able to justify writing a review of Merry Gasmas, the excellent Corner Gas Christmas episode. If I need more reason it would be because it was voted for, ever so slightly out of season, by reader Tami Ewert. 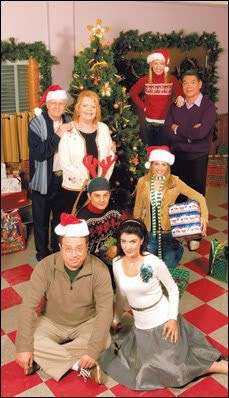 In this episode, Emma is planning a traditional Christmas in the Victorian sense rather than with the traditions that Brent has been used to since the mid 70's. Emma wants a real tree and real Cranberry sauce and Brent wants an aluminium tree and sauce out of a tin. Wanda has managed to get her little boy this years must have Trans Farmers toy - only to break the "Chew Bot" (half robot, half goat). The shop have sold out, how in blue blazes is she going to find another one before the big day? Hank ropes Karen and Davis in to his plans to help out the Buckle family with gifts and food for the festive period because he over heard the dad tell his kid he can't have presents on Christmas morning because they are too expensive. Lacey is trying to get home to Toronto only to be scuppered by flight delays, diversions and cancellations due to bad weather.

As a family, Merry Gasmas stands out as a favourite! It's relatable in the sense that people hold their own family traditions close to their heart, and often don't like to deviate from those (like when Brent doesn't like the cranberries cooked from scratch or the real tree).

I love the Lacey travelling home, and her dealings with the ticket agents in each airport. Hank collecting items for the "poor" family, was interesting, because we all make assumptions, some turn out to be correct, some do not, as is highlighted in the episode.

I think our favourite part though, is the reoccurring ambulance trips in years past. Our family laughs every year when we have our own dinner and someone will quote the show ."Be careful, that knife is sharp!"  Then someone else will make ambulance noises! We also make the sound Brent made when the cranberry sauce comes out of the can! 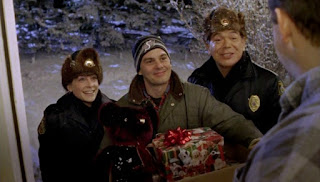 Tami has got right to the heart of this episode. In all of it the sub plots the basis of them all is "What is Christmas all about." Emma and Brent both have a similar ideology in that Christmas needs to be traditional but their individual idea of what traditional means leaves them clashing. I think I side with Brent on this one, watching the episode has made me realise something. We all need to ask a very important question. "What is the true smell of Christmas?" To my mind, it isn't Cinnamon, Gingerbread, or Mulled Wine. It's "Musty Attic". There is that, just shy of pungent waft of dust and dampness that you get off a plastic Christmas Tree you only get the smell once a year. These Yankee Candle people have got it all wrong I tell ya!

Anyhoo, whilst Brent and Emma bicker, Oscar can sit back and enjoy the fireworks knowing that it isn't him ruining the festivities for a change! An atmosphere that must really make it an especially memorable festive season for poor old Oscar.

Hank's story line covers the time for giving part of the holiday which almost juxtaposes Wanda and her ruined toy crisis scenario. The majority of us now will do anything to get that must have "thing" be it for ourselves or a loved one. Influenced by the media hub-bub that we are battered with for months before the actual day we rush out and grab items which may have little or no meaning to the recipient of the thoughtful gift. The idea of giving to the needy, helping others in a time of good will is largely lost on most (not all...don't write in and complain) these days. Hank and Wanda both come a cropper from their actions, however the overall conclusion has Wanda slightly ahead on the track. Who had it right, charity or consumerism? Who knew Corner Gas would bring up such sociopolitical arguments? Perhaps it was all just a good set up to see Wanda going ape and loosing it in a toy store! 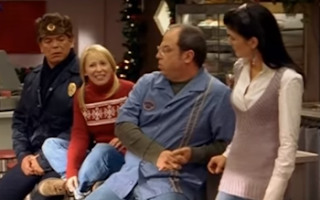 Lacey brings the importance of family to the proceedings. She goes through hell to try and get herself to Toronto to see her loved ones in time to be at the table when the Turkey in served. She and her credit card are subjected to no end of disasters. However, Lacey is willing to persevere through snow storms, uncomfortable bus journeys and a cat doctor to make sure she reaches her destination. Through the trials and tribulations she comes to a natural conclusion about the meaning of family that we the audience has probably reached long before she does.

Merry Gasmas had a whole team of writers to bring it to the screen. All show regulars Mark Farrell, Paul Mather, Kevin White and, of course Brent Butt had a hand in bringing holiday hilarity to Dog River. It is unusual to have so many credited writers. The end result is an episode overflowing with gags. The episode is full of nods to the frustration that lies behind all of us at Christmas. Proceedings could become overwhelmed with tension but everything is balanced very nicely by director David Storey. David also manages to get some great performances from the cast as usual. Fred Ewanuick and Eric Peterson are on top form in a particularly hilarious scene where Hank is at the Leroy house asking for donations to his cause. Mr. Peterson on the whole is a joy to watch, sitting back as Oscar, hands behind his head with a smug air about him knowing that he isn't in trouble with the Mrs...yet! 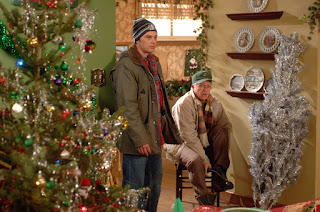 However, the real star of the show has to be Chew Bot, the Trans Farmer. Created by prop master on the show Jay Robertson, it steals every scene it is in. If there was a toy executive anywhere in the world with a modicum of sense they would market these straight away. They could have a cartoon documenting the adventures of Chew Bot and Chums! I would love to see more Trans Farmers join the crew, Optimoose Prime, Sentinel Prime-Cut and Baaaaabra (a sheep bot for the female market). Maybe they could be shoe horned into another animated series that might be coming out soon (April 2nd to be precise!) 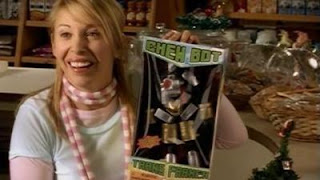 As Tami mentions, the swoosh cuts in Merry Gasmas have to be right up there as series bests. The misfortunes of Leroy Christmas' past could be an episode in itself. They make you wonder why they even bother celebrating at all!

The episode also gives a fantastic nudge on the will they, wont they button of Brent and Lacey's relationship. A little more tension, this time of the sexual variety, abounds as the two friends stand under mistletoe hanging in The Ruby. Will a little Crimbo snog be the gift from Santa that they have both been waiting for? That's silly, how would Santa keep a kiss in his sack, they would keep getting stuck to all the other presents. 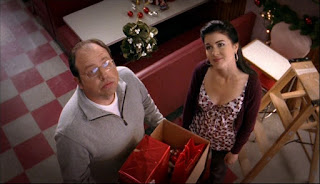 Tami and her family, I am sure, will not be the only ones that can't wait for Christmas to roll around again so they can all gather round the tube and watch their favourite Crimble-tide television offering. I however will give it a miss this year as I have just watched it three times in a row to write this post and now know it word for word. Bah humbug!


Tami gets herself one of my lovely certificates as thanks for taking time to nominate her favourite Corner Gas episode. If you would like one too, write to me at ianblogpaper@gmail.com and let me know which episode you love the most in as little or as much detail as you like. I look forward to hearing from you.
Posted by Ian Richards