I've gone on record as saying that my favorite Corner Gas episode is "Buzz Driver." Ian Richards noted it in his eloquent and moving review of the episode, and one would naturally suppose that I'm hedged in by the public record. But fortunately, in this ever-evolving Internet world of ours, it's okay to waffle, bail out, switch allegiances, and even abandon ship. All of which I'm now doing, since I've changed my mind about my favorite CG episode. It's now "Hook, Line and Sinker."
Even more significantly, this review is the result of a confluence of epic events.
First, while recently perusing my collection of the CG seasons, I chose to watch "Hook, Line and Sinker"—mostly because it's been awhile since I last watched it. So I did. And then I watched it again. And then, as breathlessly as I'm writing this epistle, I emailed Ian and suggested a review of this intensely funny episode from the lives of the Dog River gang.
Here's where the confluence comes in. At about the time I was hooting and chortling over "Hook, Line and Sinker," Ian was receiving an email from one of his untold millions of devoted fans. This one went by the name of Mike Thomas—location unknown—who extolled the virtues of "Hook, Line and Sinker" and suggested a review of same. Ian said that he had fully expected to write the review himself, but that his parole officer had mandated some additional community service and he was finding it hard to get to his computer. Apparently there was a lot of litter to be picked up on a roundabout near his home.
Anyway. Ian asked if I could write the review, and I acquiesced. One simply doesn't argue with a jackass like Ian. I'd be a jackass if I did. So: for you, Mike Thomas, wherever you are, here's a look at your favorite episode and mine, "Hook, Line and Sinker."


I think what attracts me to this episode – no, I did NOT sleep with Hank – is what attracts me to all of them: the multiple plot segments with their various twists and turns. It's not just a straightforward comedy with one storyline that works its way toward an inevitable conclusion. I mean, that worked for "I Love Lucy," and more's the power to Missus Ricardo. But one of the elements that made CG really work was the masterful melding of three or so plot lines, all of them overlapping and supporting one another.
In "Hook, Line and Sinker" (henceforth referred to as "HL&S" for the sake of my arthritic fingers), the three storylines you have to keep up with are, without spoilers:
Brent rents a roadside sign to help drum up business at the gas station and The Ruby. The only problem is that Brent's sense of humor and "pithiness" compel him to post messages not completely to Lacey's liking. "Eat at The Ruby and get gas," is Brent's inaugural offering, which is quickly changed in the opening moments of the show due to "rewrites." His next suggestion, "Come for the oil change, stay for the grease," meets with equal disapproval from Lacey. The ensuing battle between these two over what is pithy and what is not comes to some clever conclusions as the episode unfolds. 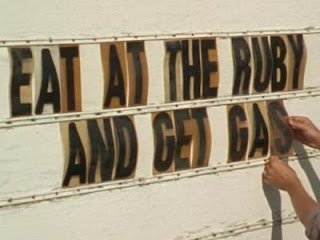 Meanwhile, Davis bails out on a fishing trip with Hank, allegedly because he has an appointment with a hard-to-schedule aromatherapist. He gets Karen to fill in for him, something she's not wild about because, well, Hank is Hank and it's a two-hour drive to the lake. Her worst fears are realized as she has to listen to Hank discuss for two hours what would happen if Darth Vader and Mr. Spock were to fight each other. Once at the lake, however, something eerie happens. Hank suddenly becomes a veritable Henry David Thoreau, waxing eloquent about the delicate interplay of cosmic forces that go into what you and I know as "fishing."
Karen is overwhelmed by what she calls his "sexy fish-talk." In a memorable scene, she grabs him by the lapels of his jacket, hoarsely whispers, "Kiss me, fish man," and pushes him to earth out of sight of the camera. 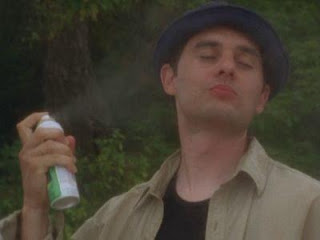 And finally, we get to watch the entire town conspire to make Oscar think he's losing his memory. It all starts innocently enough, with Oscar walking out of the gas station and forgetting his can of Alphaghetti – but not before getting into an argument with Emma about the merits of Alphaghetti over Dinoghetti, which of course everyone knows you can't spell words with. When he comes back later to retrieve the can he's forgotten, Brent and Wanda try to "Gaslight" him (see the Ingrid Bergman, Charles Boyer film for further explanation) into thinking he already picked it up. From that point on, it's a full-bore conspiracy to make Oscar think he's not on the ball anymore.
"I'm on the ball," he growls at one point. "I'll tell ya when I get off the ball. Which is never." 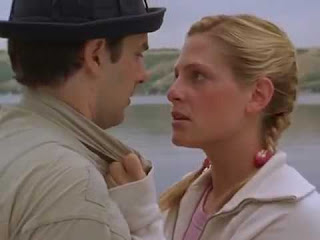 I think this episode, which was written by Mark Farrell, Paul Mather and Iain MacLean, is particularly funny because it casts a number of the CG denizens in a light we've never seen them in before. Take Hank doing his Henry David Thoreau impersonation. Suddenly the world of comic books and superhero battles in which he is normally immersed vanishes. We are left with a flinty-eyed Hank, staring off into the depths of philosophy and introspection, doing his "sexy fish-talk." We have Karen, who on any given moment thinks Hank is an idiot, suddenly viewing him as something off the cover of a steamy romance novel. We have Davis coming up with the aromatherapy excuse to not go fishing with Hank because, last time, he had "strange feelings, tingly feelings."
And then there's Brent, Wanda, Lacey and the entire town—usually an easygoing bunch, able to either give Oscar a wide berth or simply ignore his irascible behavior—actually taking an active part in trying to drive him over the edge. The biggest difference we see in the cast (without giving too much away) is in Emma, who exhibits some compassion for the jackass she lives with by putting an end to the conspiracy. 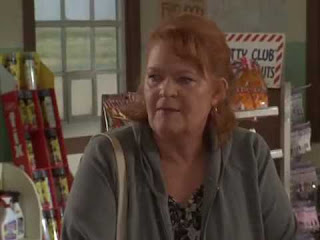 For non-Canadians, the guest stars may be a little baffling, so here's the skinny. In Brent's fantasy scene in which he is singing on "Canadian Idol," the judges are real "Canadian Idol" judges: Farley Flex, Jake Gold, Sass Jordan and Zach Werner. Even Canadians probably didn't know the woman who comes into the gas station and doesn't find anyone there, so the writers had her shout out her name and who she was—Pamela Wallin, a Canadian senator, former television journalist and diplomat.
What is my favorite moment in "HL&S"? It's when Emma and Oscar are in the gas station, where Brent is just about to spring the biggest "Gaslight" moment yet on his dad. Emma decides to put a stop to it all, but she doesn't want Oscar to hear.
Emma: "Oscar, can you wait outside for a second?"
Oscar: "Why?"
Emma: "I have to buy some…female things."
Bam! In the time it takes light to travel a millimeter, Oscar is standing outside, with the door swinging behind him. My wife liked that one, too. Hmmm. Maybe art imitates life, after all.
There are really too many one-liners and great comic set-ups to detail without giving away absolutely everything about "HL&S," so I won't. I will say, though, that this episode is one of the most creative and funny of the bunch, and that's saying something, 'cuz they were all pretty danged good. I laughed out loud, my wife laughed out loud, and I'll bet you do, too.
And no, I did NOT sleep with Hank! 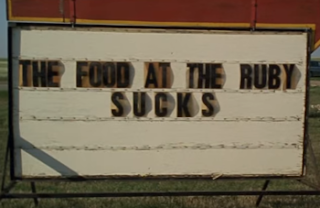 Editors Note - I would like to officially welcome Charles to the Corner Gas Fan Corner family...which is just me and him at this point, but it is the thought that counts. Charles is a well good writerer and is much really better at it than what I am.
Ian Richards
Inmate 7373505G
Cook County Correctional Facility
Cell Block No. 9
Posted by Ian Richards