The World Of The World's Biggest Things From Around the World

This week I would like to discuss Hanks idea about getting an errection in the middle of Dog River. Not just any pertruberance either, the biggest one you have ever seen! Hank wanted his representation to stand proud in the middle of a field and that people from miles around would pay him to have a look at it. He could charge extra if someone wanted a picture. Maybe they could pose leaning against it. If they were really clever they could stand in the foreground, with Hank's sturdy effigy in the distance behind them and it would look like they had it in their hand!
I am of course referring to the world's largest hoe! Wait, what did you think I was on about?
In Season 1, Episode 6 Hank wanted to bring the classic roadside attraction to Dog River. Now, this isn't the first time this money spinner has been thunk of. There are many towns all around the world that have used the draw of a world's largest something to bring in the tourist bucks. Unfortunately, not all of them have the added bonus of sounding a bit rude.
Roadside attractions have been popular since the 1920's when long distance road travel became practical. Entrepreneurs began building restaurants, motels, shops and other businesses to attract travellers. All over America novelty architecture started to pop up and often depicted common objects from the local area in enormous size.
The trend, along with the businesses, declined when Interstate Highways were introduced. However, many of the attractions still remain and new ones added to towns not only in the States but in Canada and around the world. A popular oddity that amazes on lookers with it's unusual take on the world around it. A bit like Hank.
Let's have a look at some of the best largest things from around the world.
ENGLAND
WORLDS LARGEST DISCO BALL 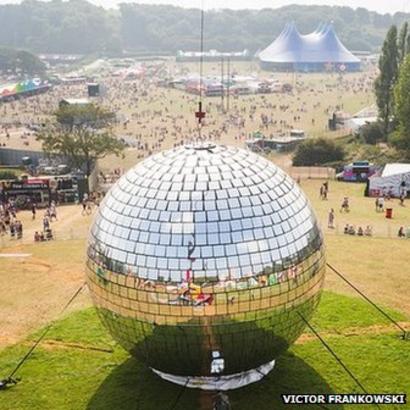 This was created for Bestival, which is a festival with an over inflated ego. We don't have many largest things over here so we were very excited when this exhibit was unveiled. This ball was eventually hung over the site of the festival and lit up with a large array of lights. Many passers by reported seeing unusual things illuminated in the sky to the authorities. These people were arrested for drug offenses.
FRANCE
WORLDS LARGEST GATHERING OF SMURFS! 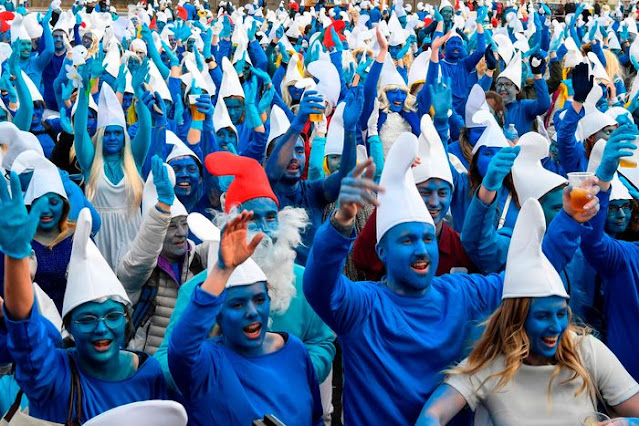 Ok, technically this doesn't count. I just like the idea of driving down a quiet French country road, probably on the way to a vineyard in a chateau somewhere, when you happen to drive past a field full of grown men and women standing about painted blue with pointy white hats on. No explanation, no signs, just a sea of Smurfs.
..oh wait actually France has this too
THE WORLDS LARGEST BOAR 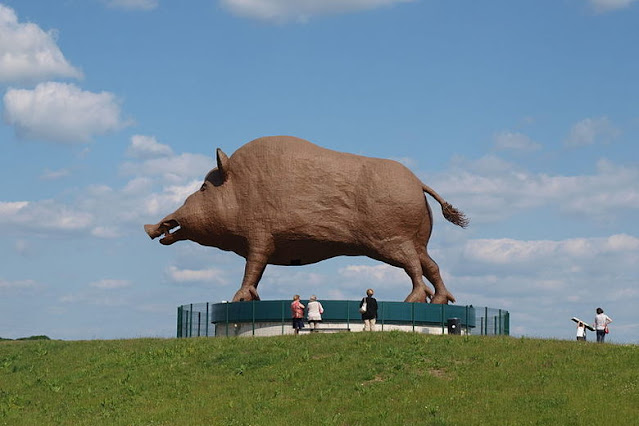 This statue is soon to be demolished and replaced with the worlds largest ham sandwich.
AUSTRALIA
WORLDS BIGGEST AVOCADO 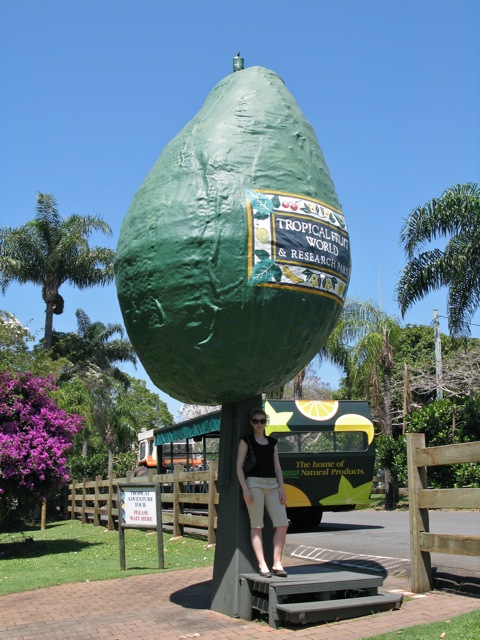 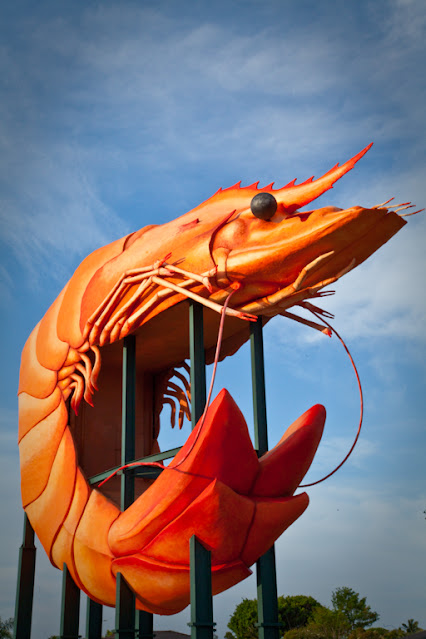 I believe that these two examples can be added to the worlds largest cucumber and lettuce to create the worlds largest salad. Now, I know what you're thinking - don't be so stupid Ian, how could you possibly eat a salad that large? Well a quick trip to Springfield, Missouri and they have you covered.
U.S.A.
WORLDS BIGGEST FORK 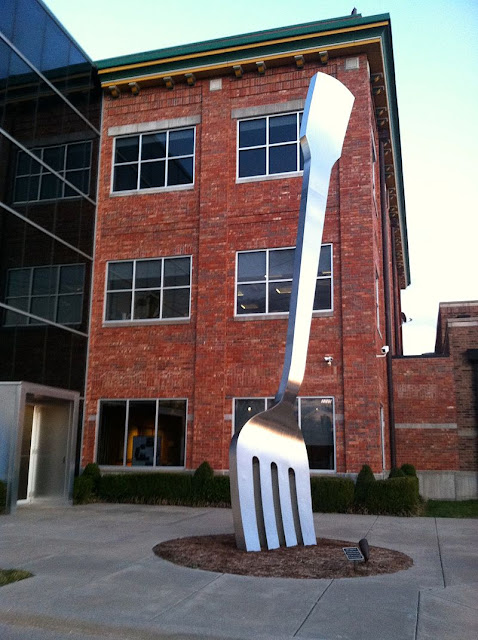 I probably don't need to point this out but the worlds largest fork also has the opportunity for some first class double entendre action just like Dog Rivers dirty/crack hoe.
Person in charge of stuff
Hello, I was wondering if you would like a fork outside?
Office Person
Well, it would have to be a large one or I'm not interested
Now the next example could possibly be the most famous of all the largest things around the world.
WORLDS BIGGEST BALL OF TWINE 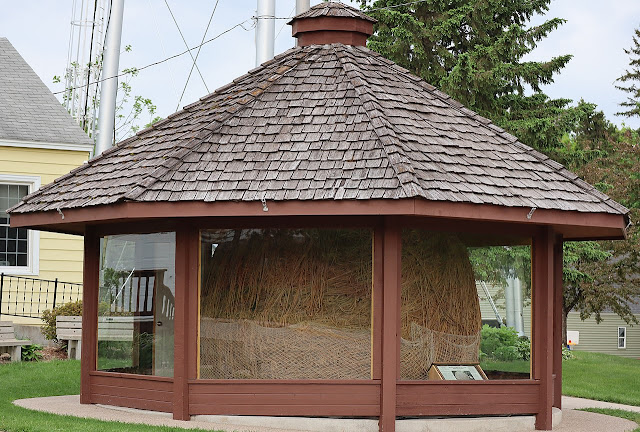 This is, of course, the biggest ball of twine in Darwin, Minnesota! As immortalized by the classic song by Weird Al Yankovic. Never heard it? Well in the next 7 minutes and 42 seconds you will have!
The most amazing thing about the biggest ball of twine is not that it is 12 feet in diameter, not that it weighs 7,900kg, not that it is so beloved in the community that it lives in it's own apartment in the centre of town. This was created by one man, Francis A. Johnson
Person in charge of asking about people
Do you like Francis?
Person from Darwin person
A Johnson!
Person in charge of asking about people
Yes or no would have done
I don't know what drives someone to create such a thing. I can only assume there was nothing on telly that night and Francis was fed up with his wife moaning about all the twine he had lying around the house.
So finally, let's see what Canada has to offer in the big stuff department.
CANADA
Now, the most important thing to remember when putting up a dirty big thing in your loaclity is to make sure that it does not enforce any national stereotypes that may exist about your country.
WORLDS BIGGEST MOOSE 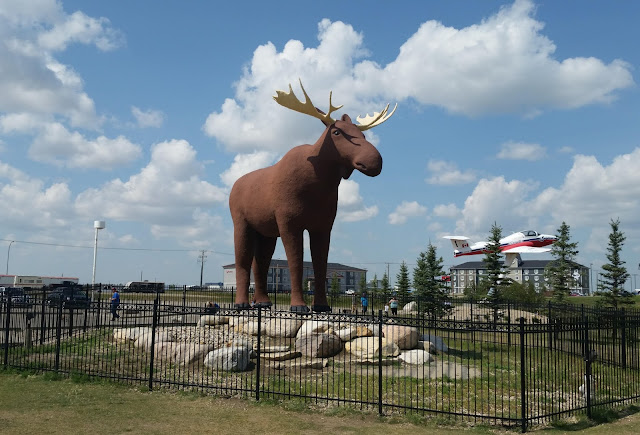 Apparently that memo didn't make it to the local council in Moose Jaw who errected a huge Moose in their front garden. I notice they also have a full size plane in the picture above. This is actually a still from a new King Kong remake that is on the way to cinemas - only its not a monkey this time, it's a dirty big moose. The statue has been given the Mac. Shortly they will be adding a smaller baby moose statue to the monument called cheese. So we can all go and visit Mac and Cheese very soon!
WORLDS BIGGEST NICKLE 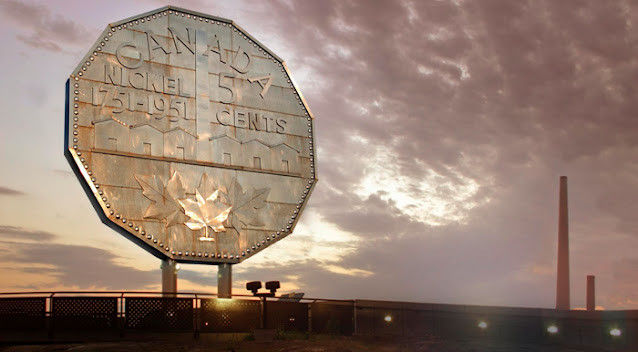 The world's largest Nickle stands proud in the Sudbry skyline. It's actually value is $550,000 and yet when I tried to use it towards my bus fare the driver got very snippy with me. Well he shouldn't have asked for exact change! Doesn't get more exact than this!
WORLDS BIGGEST STARSHIP 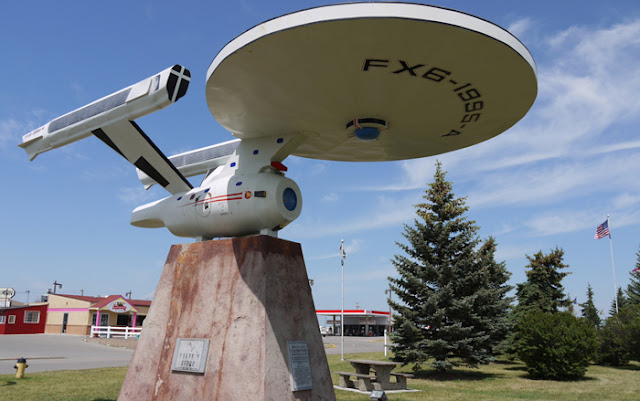 Now this is right up my alley. The biggest Starship Enterprise. Found in the town of Vulcan, south of Calgary next to a Star Trek themed visitors centre. It was made so large as it now houses a massive collection of all the hair peices and corsets William Shatner wore between 1967 and 1992.
This is just a small selection of all the giant mouments that can be founded dotted all around the world. So, when I get short of subject matter, I'll return to the subject and we will visit all these wonderful places together. It will save you the air fare. You're welcome.
Posted by Ian Richards