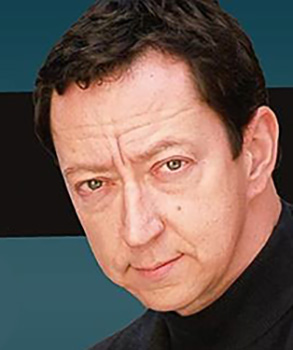 Being a top flight biographer is a very difficult job. Don't get me wrong though, it's not the most difficult job, there are many others that are much harder.
Imagine what it was like to be the guy scientists chose to prove all snowflakes look different. That chap was Barry Lemon-Curd, well, that was the name he signed on the forms when he was institutionalized. Spending ten years running around the arctic trying to catch two snowflakes in a net will do that to a fella. The day he snapped was when he finally caught two at once, put them under his magnifying glass which instantly caught the sun and melted both flakes and burnt a whole in Barry's new mittens.
That's a hard job.
Another hard job would be the person who composes Whale song. Playing a Tuba underwater is a tricky business. Your snorkel gets in the way.
If you read my posts regularly you know I always moan about the lack of information there is about many of the actors featured in Corner Gas. The details I give often have to be so broad that you could drive a car through them. As there is a lot of guess work involved I also have to tailor them to avoid litigation. This month not only am I very happy to bring you this, long awaited, biography of the wonderful Mike O'Brien but I am even happier to announce I found all sorts of details on his work and life to share with you. Yes! Finally, the fifty quid I spent on my "20 Steps to Easy Cut and Paste" online course is paying off!
I am also pleased to say Mr O'Brien manages to continue the tradition of having a Namey Twin (TM) to cause a smidge of confusion when researching. This time round the other Mike O'Brien is actor and writer best known for his work on Saturday Night Live. This makes me very happy as I can string out the gag for a 14th consecutive post. 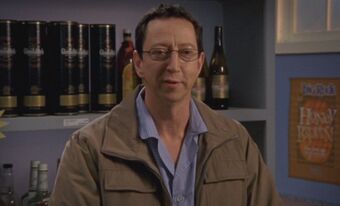 Mike was born December 29th, 1963 In Victoria, British Columbia, Canada and grew up in Inuvik, a town in the North West Territories. He studied at the University of Victoria concentrating on Creative Writing and graduated with a degree in the subject.
During his time at Uni Mike had worked at five different weekly newspapers around British Columbia. Being that he had discovered a skill for making people laugh early on in his life he had considered a career in acting, however, he decided to follow the path of a Journalist. He took his first position with The Medicine Hat News (which seems a very niche subject for a newspaper- Doctors must have a lot of head gear) in Alberta. After spending around two years at there he moved to Regina to become a reporter for the Regina Leader-Post. He was a reporter at the Post for fourteen years and covered a wide range of news subjects, even reporting from abroad.
It was in Regina that Mike started acting again and appeared in amateur theatre productions. He eventually joined CBC Saskatchewan as a radio producer.
In 1999 Mike wrote Calling The Prairies Home a book that discusses exactly what the title suggests. The book includes a bit of everything. History, Philosophy and Mike's trademark humor. Giving a wonderful view of life living on a Prairie, the book is a huge hit with readers. Reviews give the work a five star rating across the board (keep an eye out for mine - coming as soon as my copy arrives from Amazon). 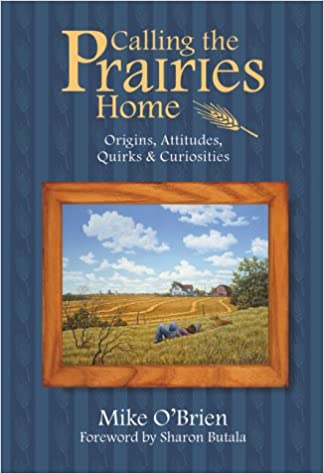 It was around this time that he started to act again and won roles in film and television starting with commercials and eventually appearing in movies. This would all lead him to his regular role in Corner Gas as fan favourite Wes Humboldt liquor and insurance store owner.
His first listed movie role dates from 2001 an independant movie. Cast as "Thin Man", which I guess he was well suited for, in Solitude a story of a young Friar looking for truth within a Monestry who finds love where he least expects to. Must have been down the back of the sofa - always the last place you look for love.
In 2002 Mike featured in the short movie by Billy Morton The Stuff That Makes You Lift Cars. Mike plays Dan the host of a dinner party attended by unwilling guest Keeper and his girlfriend. All Keeper wants to do, like a lot of us when these events occur, is stay home and watch Hockey. The movie is wonderfully funny and well observed. Ordinarily I wouldn't post a link to a movie on You Tube but seeing as it appears to have been uploaded by the writer/director I figure I'm safe.
**Editors note - Due to Google messing around with their Hooferdoofers and Flux Tappits direct link videos on Blogger only work on certain machines. So in a moment of genius I think I have found a way round the problem. Click the picture below and hopefully you will be whisked off to You Tube video!**
So, enjoy - come back in half an hour - I'll wait for you at the next paragraph. 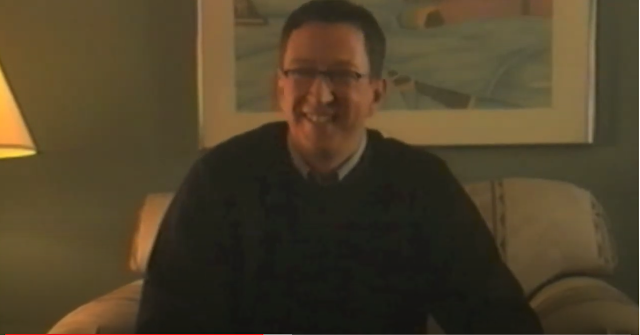 There. Good wasn't it? Ok, shall we continue? Oh....ok, well you go do that first then. Don't forget to wash your hands this time.
Back? Good.
During his run in Corner Gas Mike would also get to work with fellow Dog River Denizen Fred Ewanuick in Hollywood Romcom Just Friends. The movie stars a young and upcoming actor Ryan Reynolds who after this seems to have done very little. The cast also features Amy "No Clue" Smart. No not like she hasn't got a clue, she was in the Brent Butt movie No Clue. Well, I assume that's correct, I don't know the lady. If she was stupid I would imagine her surname would get her into all sorts of trouble with the trades description people,
Just Friends is the story of a socially awkward chap who changes his life after being rejected by his high school crush. He turns into a serial womanizer who meets the girl again one Christmas. Will he become the loveable nerd again or continue on the new path he has chosen? The movie has an excellent cast including the always funny Anna Farris and Chris Kline. Mike rounds things out with his role as a Hockey Dad.
Here's another picture to click on for you.
Mike was incredibly busy around this time, fitting in his Corner Gas role with many other appearences. In 2005 he became a comedy writer for CBC Radio. His dream job, situated in Winnipeg had him writing sketches and columns that appeared on shows on CBC around Canada. Later in his career, 2011, he would have his own radio show, Strange Animal.
After his run on Corner Gas Mike continued to work in film. In 2008, the same year Corner Gas came to an end, he starred in another short entitled The Rooster. He played Ray Gherling a Vietnam vet residing in a mental institution who needs to convince his Doctor to release him before the last of his memories of a former life leave him forever. I had a thorough search around the net, for at least five to six minutes, and unfortunately the short doesn't appear to be readily available to watch. This is a shame as having of Mike in a dramatic role is something I would very much like to see 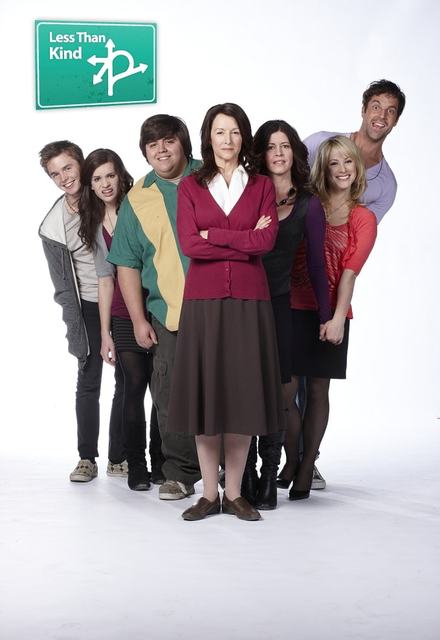 2008 Mike was featured in another regular role in popular comedy Less Than Kind as Lorne Goldstein. The show followed 15 year old Sheldon Belcher (possibly related to Bob Belcher of Bob's Burgers which just shows how nepotism is still rife in the entertainment industry) and his tribulations living in Winnipeg with his less than functional family. The show ran for four seasons and Mike featured in 16 episodes. It seems the show was very popular, I wonder if they need a fan site created for them?
2009 Hollywood called again, this time to feature in a fish out of water comedy New in Town starring A-Lister Renee Zellweger and her original face. The movie told the story of Lucy Smith, big time business women from Florida adjust to small town life in Minnesota. Think Lacey, with less Chili Cheese Dogs. Mike played factory worker Lars Ulstead and can be seen in the trailer below - if you click the picture. 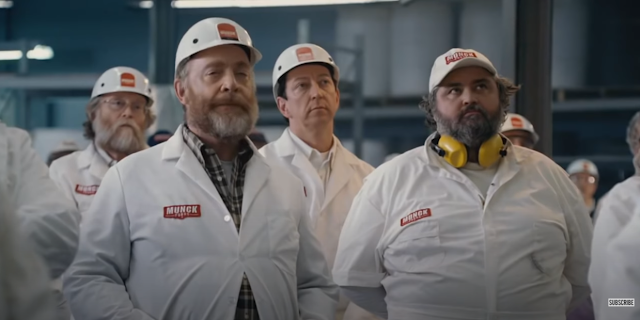 In 2011 Mike was diagnosed with Cancer. He continued working in television and film as well as writing for radio,
Now, when I write for this site, and I come across information that is sad or maybe a little sensitive I will either brush over it briefly or leave it out all together. I do this for fear of upsetting someone who may read my work and from a belief that certain things shouldn't be for public information. It's nobodies business that X likes a certain detergent to wash his or her undies in. It doesn't come from a place of morality it comes from being British and that sort of thing is just not Cricket.
However, Mike made his illness public in the most amazing Blog it's ever been my pleasure to read. His diary of living with his illness is equal parts touching and funny. Very funny in fact. The site is called The Big Diseasy and is a masterful piece of work the Mike created with his wife Robin Summerfield.
Here's a quote from Mike I found on IMDb. Cut and Paste online learning don't fail me now!
I'm living it, and I see moments that are funny. So you can't tell me there's no humour in it. You could see the exact same situation as me and not see the comedy. That's fine. But just the way I'm geared and wired is I'm always on the lookout for that. If you're sitting in a waiting room, an emergency room, waiting to see a doctor about some side-effect, if we can crack a few jokes we're going to feel better... I have cancer, it's going to kill me, but that doesn't mean it beats me. Because it certainly hasn't stopped me having wonderful experiences for four years, and a really great life.
The quote essentially relates the bravery that shines through all the posts on the site that span over a two year period.
This in itself makes me want to rethink my policy of avoidance in certain issues. Maybe I shouldn't shy away from joking about a sensitive subject. Treating the subject with humour, but also with respect can be healing, it can be helpful. It doesn't have to be in bad taste and can help us all to understand and bring us closer together.
I have learnt many things from Mike's writing. One thing was that Mike had a hand in writing a cookbook which I didn't find mention of elsewhere and have therefore missed out from the above post. It is nearly tea time and I can't go back an add a passage about the book or my sprouts will boil over. So lets all assume it's a great read and possibly has a recipe involving cheese and another with chocolate in it. 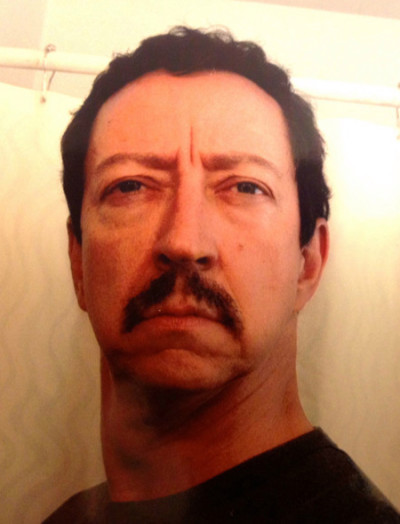 I am not going to tell you the ins and outs of the site as I would love for you to discover them for yourself. There are links peppered in the text above and there is another one coming up for good measure. The site is one of the greatest items I have ever had the pleasure of discovering on my journey through the world of Corner Gas and that includes Chili Cheese Dogs. Oh...and cut and paste.
https://thebigdiseasey.wordpress.com/about-me/
Mike O'Brien 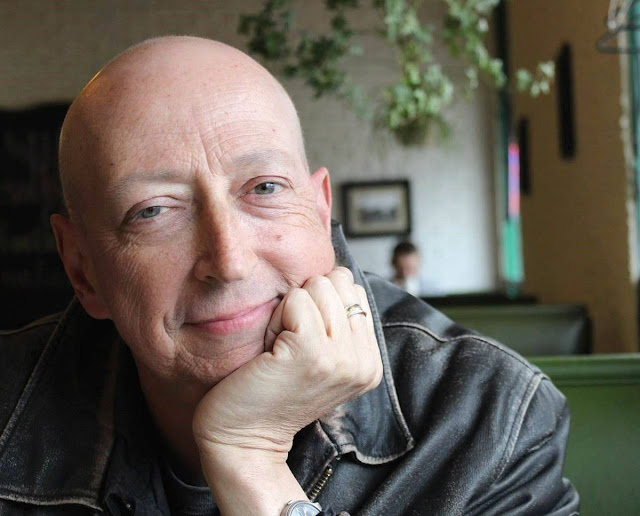