Since I started Corner Gas Fan Corner I have encouraged audience participation. I get lot of nice e-mails and communication with many of you out there. However, entries of fan made Corner Gas items have been few and far between. So I thought I would give you a couple of examples of things that have been sent to me and a chunk of something I am working on to see if I can get your creative juices flowing.

A few weeks ago Corner Gas super fan Sarah Wylde sent me an awesome picture she drew of animated Wanda. 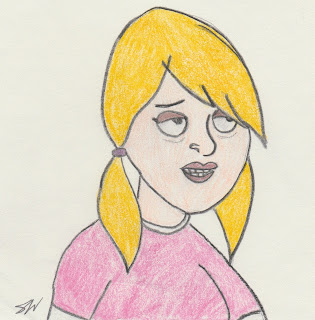 You are one talented individual. Sarah also put together a fan video set to Not A Lot Goin' On which can be seen here.

I also was sent a story by reader Mike Thomas who's wife called an inattentive driver, in reaction to nearly being run into by him, a "Stupid Davis Jerk-Face!" Now there is an example of on huge Corner Gas fan. Someone who has a Davis based insult in their head ready to call out when faced with road based peril!

So here is my contribution. A work in progress which takes a little explaining. I actually started working on this sometime ago. A script for an episode of Corner Gas Animated. My thinking was now we are in the world of animation the doors are flung wide open for a whole host of possible scenario's to put our beloved Dog River denizens into. So I figured why not mash up Corner Gas with another fan favourite, Star Trek!


As season one of CGA rolled onto our television screens I saw a video of Brent Butt explaining the laws of the new show. I'll be damned if I can find the video now but one thing he said was "You can't have Corner Gas in space!" His reasoning being that although we are in an animated world the characters have to be based in some sort of logic which anchors them in the Dog River that we already know and thus makes the characters and their situations more believable.

Oh blast! I thought, that puts the kibosh on my little idea. So I stopped working on it.

However, as much as I understand Brent's thinking I am not entirely sure that I agree with him. If the set up is framed correctly it could still work. Besides which, if I don't disagree I have nothing else to write for this post.

So here is a portion of my script, simply and rebelliously entitled

BRENT and WANDA are behind the counter. Brent is casually reading a comic-book, Wanda leaning against the counter doing a crossword, chewing red rope licorice.

HANK enters in a hurry, waving a what looks like an engine part at Brent.


Brent, do you have a spare Whats-a-ma-jigger? It's really important.

No, a Whats-a-ma-jigger, this one's broke. It's off of the Thingamebob


Sorry, all I have is a Doohickey, a Doodad and half a Diddly Bob

Which half? The Diddly or the Bob

No, I don't need any of the "D" parts. Come on guys it's really important.

What's the rush already. Who put a fire under your flapjacks?

There is an electronic beep coming from what sounds like an intercom.

KAREN
(Off. from Intercom)

Brent sighs, puts down his comic. Wanda, Hank follow him to a cooler at the back of the store. They all follow each other into it, each disappearing as they go. Wanda sticks her head back through the open cooler door.

Corner Gas disappears. It is a  hologram. It turns itself off, leaving an empty, white square room.

Brent, Wanda and Hank enter a busy corridor of the S.S. Saskatchewan, the space vessel Brent is apparently the Captain of, still wearing their Corner Gas "costumes." Red lights flash, a warning sounder strobes and crew members of the ship rush about in panic.

What the hell? So much for my day off in the Holocube-a-rama-room

I told you it was important

WANDA
(Into communication panel on the wall)
Davis, what in sweet Jupiter is going on?

DAVIS
(off. From intercom)
I asked Hank to fix the holo vendor on Deck 5...

EXT S.S. SASKATCHEWAN. The ship suddenly takes a nose dive. Brent, Hank and Wanda are thrown, sharply, through the air down the now vertical corridor. An automatic door swooshes opens at the end of the corridor, as they reach it, that leads to the ships Bridge. They land, violently in heap against a console.

Bridge crew, DAVIS, KAREN, PAUL and WES stand to salute and immediately fall, joining the heap with the other three

OSCAR
(off. from intercom)

Captain, this is the engine room. Which of you Jackasses took the whats-a-ma-jigger out of the hoofer doofer? It's all gone to hell in a hand basket down here.

Computer! One chili cheese dog and a cup of coffee, bridge holo-vendor stat!

EXT S.S. SASKATCHEWAN. The ship suddenly pulls out of the dive, stopping perfectly horizontally, an inch away from the planet surface.

INT S.S. SASKATCHEWAN BRIDGE. Karen, pulls herself up and checks readouts on the computer screen in front of her

Amazing Captain. How did you know that Hank had coupled the navigation controls and the holo-vender back to front and that your order would put us back on course?

We hear Brent's stomach rumble. He clutches it quickly to muffle the sound.

INT. CAPTAIN'S READY ROOM. Brent studies a hand monitor intently. On the screen, a comicbook. A doorbell sounds, it is the general lee horn

The door swooshes open. Davis enters, he is a fierce looking alien. He has ridges up and down his forehead

SWOOSH CUT. INT. DAVIS' QUARTERS BATHROOM. Davis, his forehead normal, is in a deep bubble bath, playing with rubber ducks. He looks at his fingers they have gone all wrinkly.

Oops, I think I have been in here too long. One last dunk.

He ducks under the water, and comes up, covered in bubbles. After a beat his forehead ridges up super fast with a pop giving him the look of a fierce looking alien.


How bad is it out there? Did Deck 10 fall off again? I hope not, that's where they have the good coffee.

No, all decks are present and correct. The damage in minimal but our insignia got dinged up pretty
but we have our best man on the job to fix it up good as new.

Good, let's get to the meeting. I hear these Kah'Nukz are pretty tough customers.

INT. LEROY QUARTERS. OSCAR LEROY is rummaging in a cupboard as EMMA LEROY sits on a sofa. She picks up two small hilts from a coffee table, she  press a button on the side of each, igniting laser beams with a whooom. Emma proceeds to knit with them.

The rest of the script remains secret. Who are the Kah'Nukz and what weapons will they wield? What is Oscar searching for? If I get a positive response I will post the rest of the story later this year. I will give away that Emma is the ships empath and she doesn't need to use her skills to know that Oscar is an idiot!

So there are a few ideas for you. If you have anything you would like to contribute, stories, memories, fiction, art, jumpers, vegetables that look like Hanks nose, send them to me and I will use them in a future post. Contact me at ianblogpaper@gmail.com or any of the other addresses available on the contact page.

I look forward to hearing from you. Live long and prosper!
Posted by Ian Richards