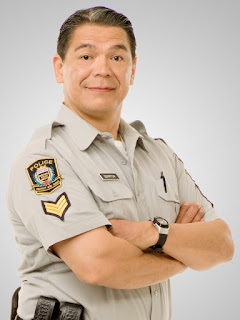 Recently I moved into the new Corner Gas Fan Corner office. It had become a necessity because the business outgrew the space we had previously rented out on my kitchen table. It was dinner time and the laptop was in the way of putting the plates out. The operation is now being run out of a new cutting edge, contemporary space I found under the stairs. Roughly two feet square it boasts all the leg room you could possibly want if you leave the door open. The office features all the technological gadgetry a high flying businessman such as myself requires to be able to plug his laptop in when the battery is running out.

The first thing I did in my new home was to hold this months Corner Gas Fan Corner AGM (CGFCAGM). I started with a budget summary and discussed the possibility of the acquisition of a potted plant and one of those posters with inspirational slogans on them like "There is no I in team unless you are playing Solitaire". I then turned my attention the business of who will be the subject of this months actor profile. I decided that I should probably write about Nancy Robertson. It was an easy choice as I wrote about her last month which means all the hard work had already been done. One cut and paste and I would be in front of the telly watching "Celebrity Tattoo Disasters" with my feet up knowing a good days work had been done. However, my conscience wouldn't allow me after I found that I had already seen this weeks episode and I now had a spare hour or two. So this month I would like to draw your attention to the always fantastic..

Lorne was born 6th January 1964, one of eleven siblings. He has one elder brother, Lewis who always knew his brother would become an actor. He remembers Lorne being caught eating toothpaste, his face covered in foam, being very convincing when he said "I didn't do it, Lewis did!"

His family is of Cree decent. The Cree are one of the largest groups of first nations, over 200,000 members live in Canada. He and Lewis attended ten schools between grades 1 to 12. Often being the only pupils of Aboriginal descent Lorne would find himself being bullied and Lewis would act as his protector. Lorne used humour to gain acceptance from the other kids at school and also as a remedy for hard times that became of his family in the late 1970's. He would act out routines he had learnt from comedy records he found in the library by stand up's such as Woody Allen and Richard Pryor.

It was around this time that Lorne caught the acting bug. At the age of 23, after working since the age of 14 to help ends meet, he enrolled at Cariboo College, Kamloops, British Columbia. There he signed up for an introduction to acting course as he thought it would be an easy three credits and a great way to meet girls! He performed his course final project in front of 120 people and knew he had found his vocation. He left college to join University of Alberta. In 1993 he became one the first aboriginal students to graduate from the university's drama department.

He immediately started getting work on stage and screen. One of his first roles was in a production Shakespeare's Twelfth Night at the Dream in High Park Festival, Toronto. He also played Chief Red Cloud in a smash hit production of the play Black Elk Speaks. Television roles soon called and Lorne was cast in Lonesome Dove: The Series as Spotted Elk. Roles also came in other high profile t.v shows such as Tecumseh, North of 60 and Big Bear. His role in the later as Little Bad Man was particularly well received. He remains a constant recognisable face on Canadian t.v. taking roles in all genres and on well regarded programs.

Despite being in high demand for television work Lorne also continued to work on stage. He starred in productions of  Copper Thunderbird, For the Pleasure of Seeing Her Again and, most notably, King Lear which was performed by an all aboriginal cast. In the film Chasing Lear the behind the scenes story of this historic production as captured by Lorne as director, a role he shared with his partner Monique Hurteau. His contributions to Canadian theatre were recognised by the Thompson River University where he received an honoury degree.

Lorne is passionate in promoting First Nation culture and does so through his work with Native Earth Performing Arts, a touring company dedicated to bringing original native productions to the stage and encouraging participation of indigenous people in the performing arts. He is also highly active in promoting humour as a healing tool, travelling the country with workshops, giving talks and helping others discover how laughter can often be the path to healthy living.

Lorne continues to be extremely busy in numerous roles on stage and screens big and small. However, to most of the world Mr. Cardinal will always be Davis Quinton, the affable, unerringly lovable law enforcement of the Dog River community. In the role he was born to play, Lorne has been lorded with many awards and nominations including a Gemini Nomination for Best Individual Performance in an Ensemble Series.

Sitting here in my swanky new office, next to the boiler and under the ironing board, surfing the net looking for all this information two things occurred to me. Firstly why has Lorne Cardinal never won an award for best hair on television? Secondly, I wonder if I move the fabric softener and super mop into the garage I might be able to fit a white board in here!
Posted by Ian Richards