Well if there was a more apt time to say that there is not a lot going on it would be right now. At time of writing the population of the whole world has been attempting the world record for the longest game of hide and seek ever. It has all being going swimmingly, however, unfortunately before we all locked the doors behind us we forgot to find out who is "it". I have spoken to the world powers for you to see if we can figure out who it is we are supposed to be hiding from. The chap I was speaking to was very muffled, sounded like he had a face mask on, if I heard right it seems we are to be on the look out for a young lady called Corina, she's about 19. After that details were sketchy at best.

So, with everyone hiding behind the sofa like a child of the 70's watching Doctor Who, you would think I wouldn't have a lot to report. Well actually I probably have more than usual to send your way.

I make light of a serious situation but I think it is important wring as many laughs out of everything we can in times like these. It is amazing how the global community can come togther by the super highway of gigabites and broadband to try and raise a smile from their front room to yours. In this respect the Dog River Denizens and colleagues are front and centre.

Tara Spencer-Nairn was a front runner - almost literally. Early on in lockdown she took to her Instagram account and invited us to join in with her fitness routine. Unfortunately, I can't bring you the whole video as on Instagram live footage disapears after 24 hours. I was present on the feed and I can confirm that Tara is crazy good at skipping rope based antics. I was all out of breath just watching for five minutes. The feed lasted about ten minutes and Tara was a blur of legs and ropes.


Mr Fred Ewanuick seems to be taking to more sedate ways to pass the time in his house. According to a recent Instagram post and a reply to a twitter question Fredrick has been in the kitchen cooking up tasty treats and is solely responsible for the supply of baked goods for girl guides to sell door to door. 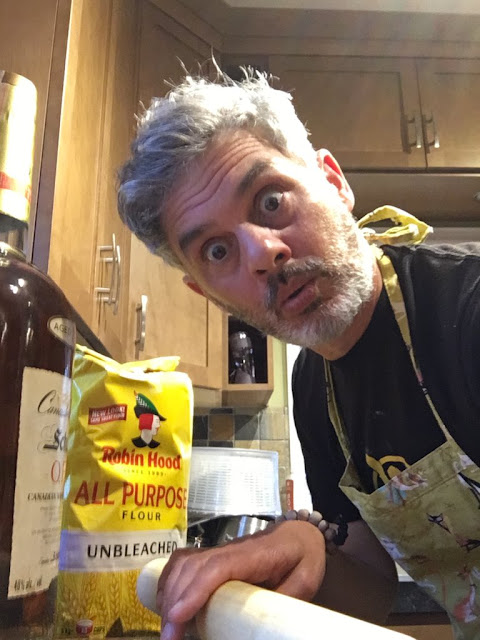 Lorne Cardinal and Monique Hurteau being two of the most creative beings on the planet took to social media to bring us a little cheer and a message for everyone.


Music abounds from all our Corner Gas Fan Corner friends. Craig Northey the worlds busiest musician has been cranking out the tunes alone in isolation with all his band mates. "How is that possible Ian" you ask? The TransCanada Highwaymen released this version of Barenaked Ladies classic Alcohol. The recorded all there parts separately, Craig mixed them and handed them over to Cole Northey to edit them all together into a natty little music video.

TransCanada Highway Men is a supergroup comprised of Moe Berg from The Pursuit of Happiness, Chris Murphy of Sloan, Steven Page ex Barenaked Ladies and that Craig Northey bloke. Using the same method they then released this cover of Sloan's - Ready For You. Craig takes an unusual seat behind the drums for this one.


Craig is obviously very busy scoring Season 3 of Corner Gas Animated at the moment. Production is still taking place for the new series of our favourite show at the moment. All the production team are able to continue apace using all the latest technology available. A few people have asked but I have no details as to when the season will be released. One tweet I read that came from Corner Gas Official's feed suggested that Summer is likely to be when we get to see the new episodes. Also for a WORLD EXCLUSIVE bit of CGA news check out my interview with David Storey here.

Craig found that he had five minutes to spare between his regular gig and putting together the tracks above. His fingers started getting twitchy so he jumped onto the net with his other, other, other band The Steven Page Trio which also features the talent tornado that is Kevin Fox to record an early version of new single penned by Steven Page cleverly entitled "Isolation"


I always marvel at these creative types. Where on earth do they get their inspiration? You know how the old tymey singles used to let you have multiple versions of the same song? Well I can do that here for you at Fan Corner. Here is another solo variant of the same tune from Mr. Page.


Want a bit of the drum track Isolated from Isolation played in Isolation by our friend and Jackass-Cast yak provider Liam McKinnon? No? Oh...well here it is anyway.


The full finished track "Isolation" is now available on all good streaming services to listen to again and again. You could just go to the top of this post and start over, saves you having to pug your headphones in again!

Well this is turning into a very Craig centric post so lets fill you in on what Brent and Nancy have been doing....before I return to more Craigy shenanigans. Nancy has been busy learning new life skills using Brent as a willing Guinea Pig. Well at least I assume he was willing. Brent filmed the whole harrowing affair and posted it to his Buttpod You Tube channel.

Now, being follicly challenged like my lookey likey Mr Butt I do feel his pain. This isn't the only pain Nancy decided to inflict the net with recently.

Not gonna keep my love to myself. pic.twitter.com/CR7bsLfKFs
— Nancy Robertson (@nancyRtweets) April 2, 2020

This new track is from Nancy's upcoming album "Never Had One Lesson". Over on Instagram Nancy provided us with another tune she is working on for the project. Craig Northey isn't the only one that can write deep and meaningful lyrics you know!


If you do not follow Nancy on Instagram I highly recommended it. She often provides some of the funniest posts you are ever likely to come across.


My life just keeps bringing me back to this pic. No one can capture my true essence like @tedbelton #staythefuckhome Almost forgot to tag the amazing @erin.heather who did my hair and makeup!!!!
A post shared by Tara Spencer-Nairn (@tspencernairn) on Apr 11, 2020 at 8:33am PDT

Well this is all good an well but you would think that Craig Northey would pull his finger out and get some work done for a change wouldn't you!? Well turns out that during the five minutes he found he had free earlier some of it wasn't used up. So he called up Doug, Pat and Murray - his chums from Odds and gave us a couple of new tunes to have a jig around to in our preferred dancing space. First was a cover of "Hello There" by Cheap Trick

Not statisfied that his days work was done Craig got the boys to rock out to "Uncontrollable Urge" by Devo. The video gave Doug a chance to show off his previously unacknowledged sledging skills!

When the boys finished playing they realised they had a bag full of musical notes left over that they hadn't been able to use. So they used them all up, except for two spare D#m's and an A7, with this snippet of a song by some band called The Beatles. Ths was used for UKUA Radio's tribute to healthcare workers.


So there we are. All caught up for another month. I know it's tough out there at the moment. It will all be back to normal soon. I wish you and all your families love and happiness and hope you are all safe and sound at home. If you get bored don't forget you always have your friends at Dog River to tune into. Why not watch over some of your favourite episodes again.

To help you pass the time as best as possible I have released three new episodes of The Jackass-Cast for you to listen to earlier than intended. Season 2 so far features my lovely chats with Nancy Robertson and David Storey and a DVD style commentary track for Season 1 Episode 1 Ruby Reborn provided by my good self. Coming next week I will have a new episode featuring that lazy so and so Craig Northey for you to enjoy. I'm working on new guests all the time and will bring episodes to you as soon as I possibly can.

Anyway. I'll leave you with this last video from Lorne and Monique. We all have somewhere we would rather be right now. Me, it's British Columbia - not British Britain where I always am. It is truly is my happy place so it made me smile to see this little gem pop up on Lorne's feed featuring my friend Jake who once tried to sniff me in inappropriate area. A little glimpse of the light at the end of the tunnel.


Wanted to bring you on our walk, especially those who can't get outside. My family - @moniquehurteau, Jake + I are on a trail called Wonderland (Larry + Clarisse are curled up at home). Jake just had surgery and he's doing great (that's why his neck's shaved). My neck is shaved so it doesn't get caught in my jacket zipper. Socially-distanced hugs from all of us in Squamish ❤
A post shared by Lorne Cardinal (@lornecardinal) on Mar 24, 2020 at 3:40pm PDT