Growing old is hard work. Especially when you have a medical condition like I do.  I am registered as maturity impaired. In my head I am still a teenager so I find it hard to understand that why when I sit down in, or get up from, a chair I find the need to make horrendously loud groaning noises. It takes the fun out of trying to watch Spongebob.

How is it when I play Laserquest these days that roughly 203 out of the 206 bones in my body regularly make unnatural cracking noises only usually heard inside a bubble wrap testing facility?

Reading comic books has also become tricky since I discovered you need to have really good eyesight to see through my glasses. The lenses on them are so thick that it takes light 48hrs to pass through them so everything I see is two days behind the rest of the world.

Am I getting too old to do these things any more? Maybe I should come to terms with how things are changing and give up youthful pursuits....except Spongebob.

Many of us of a certain age find ourselves thinking “If only”. Would our life had turned out any better if we had done something slightly different? Even, could you have a do over on something you failed miserably at when you were younger but your grown up, worldly wise, skills would be able to take care of with flying colours. Like for example, the whole of high school?

This is the big question asked in the new movie starring Michael Coleman and Fred Ewanuick, 37-Teen. 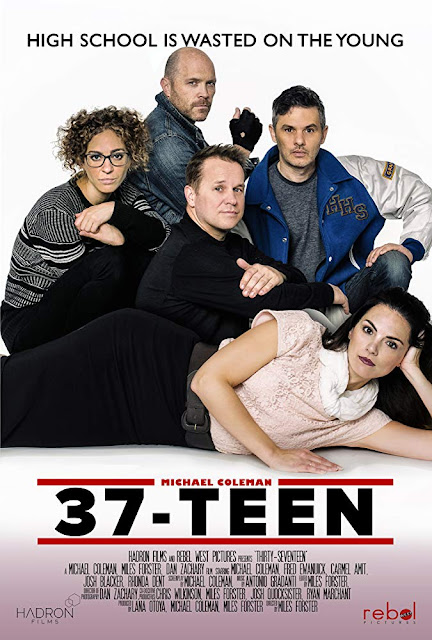 Billionaire, software mogul, Adam Pi has everything in life with the exception of positive memories from High School. He begrudging goes to the 20th reunion and has such an amazing time he finds himself wondering "If I knew then what I know now" and offers the entire grad class one year's salary to come back and do one more month of the 12th grade.

1 - The easiest way I could describe this movie is via it's obvious tip of the hat to all those John Hughes classics we know and love. It sets itself up as a homage to his eighties classics, particularly Ferris Bueller's Day Off and The Breakfast Club. Check out the poster above, movie geeks among you will recognise the poses from Breakfast Club ads and the huge geeks (the kind that don't wash and still have all their action figures mint in box) will recognise the font from Ferris Bueller's poster. Check out this alternate poster channelling Ferris and Say Anything, the Cameron Crowe classic. 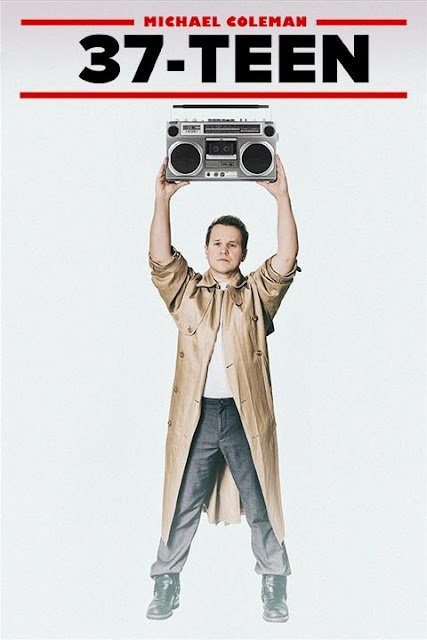 2 - It's a bit naughty. This is John Hughes meets Kevin Smith. Those of you coming to this for the Fred Ewanuick connection might want to get ready for a bit of naughtiness that you don't generally see from his back catalog. We are, in the most part, out of family friendly viewing here and all the better for it. The dialogue is sharp, witty and rather naughty at times, similar to the work of Kevin Smith (Clerks, Chasing Amy) at his best.

3 - The screenplay, written by star Michael Coleman, brings us all the teenage archetypes of a Hughes movie the bully jock, the frustrated book worm, the good guy wing-man and re imagines them as adults. Have they changed, has age bought them the wisdom to become different or better people? If so what would they do to have a bit of their old self back again. Relive the old days. The premise is one that could get away from him and start meandering down a saccharine  path. However, he avoids that trap extremely well never allowing the story to get caught up in sentimentality. The rag tag group of friends, enemies and frenemies (Is that a thing? Well it is now!) have just enough charicature about them so we recognise the role they play in both the movies group and that of the genre but are not over played so that the are no longer believable. 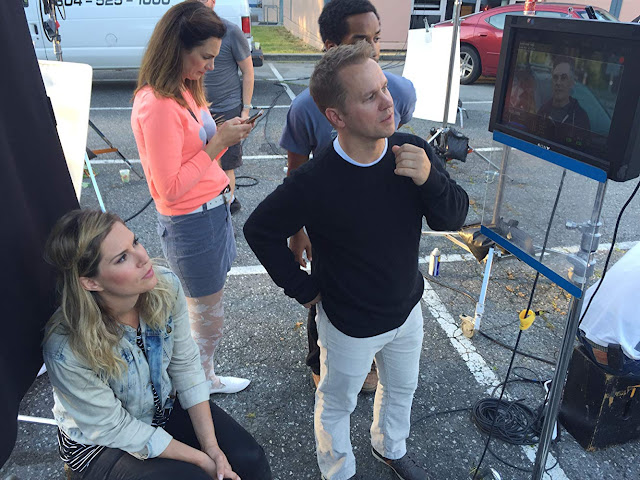 4 - It is also very, very funny. This is particularly the case if you catch a lot of the references to the movies 37-Teen lovingly homages. Ferris Bueller even gets a shout out. Being a comedy geek I watch a ton of funny flicks, and even if I enjoy them it is very rare, sadly, these days that I laugh out loud. There are so many great throw away lines here that got a huge bellow out of me. One line in particular about restoring a certain part of a female anatomy was genius and made me shoot warm tea out of my nose and over the cat.

5 - Miles Forster directs with aplomb. Keeping the story tight and moving at a clip he keeps a nice balance between comedy, romance and drama (the later being fairly light, but it is there never the less).

6 - The whole Hughes connection is nicely pinpointed by an excellent score by Antonio Gradanti. Movie maniacs will hear where Mr. Gradanti skilfully plays with melodies that are instantly familiar from the Hughes cannon but never imitated.

7 - The cast are pitch perfect. Michael Coleman as Adam Pi makes a very affable leading man. Michael is recognisable from his work in many t.v shows including Once Upon a Time, Smallville and his current show Hipsterverse currently in it's second season. Adam has it all, money, fame, confident to the Dali Lama. He has a likeable charm which belies someone in his position. The whole premise of the movie could come crashing down if it wasn't for the fact that Mr. Coleman makes Adam and his hang up on his failure to make it through high school unscathed believable. Josh Blacker (Arrow, Stargate Universe)  puts just enough smarm and menace into Trevor, Adam's high school nemesis without over blowing the characters innate doucheness.

8 - Fred is in it and, as ever, his performance is amazing. He plays Greg, Adam's best friend and business partner. Almost against type, Fred is the voice of reason here. Greg warns Adam that his folly could be detrimental to all they have built in their mobile phone empire and also their friendship. One could draw comparisons to Cameron, Ferris Buellers put upon, uptight, bestie. However, Fred makes a familiar character his own and draws some real emotion to his scenes in the later part of the movie. As ever he also brings some of the biggest laughs. One line in particular, a blink and you miss it (if you can blink your ears - if you can I suggest you seek immediate medical attention) reference to Iron Man, uttered by Greg, is by far my favourite of the movie and I am praying that it was improvised because that would raise it's genius up another notch.

9 - Scott Patey also brings his A game to the role of Steve. The eternal slob, still living at home with his parents who he apparently hates, Steve is the embodiment of the phrase Man-child. If anything, the movie could do with more Steve, a memorable comic creation. Scott Patey pretty much steals every scene he is in.

10 - The beauty of the characters are that, as much as they are often writ large, they are still relatable. Adam's plan comes from having an amazing night at his high school reunion, an event he was otherwise dreading. Who of us haven't been in that situation and come out of it glowing, wondering what we were worried about in the first place.The morning after the night before scenes are standout here and despite a horrendous hangover who could not come out of the party of a life time full of enthusiasm for life and full of ideas of how your life can change from here on in. 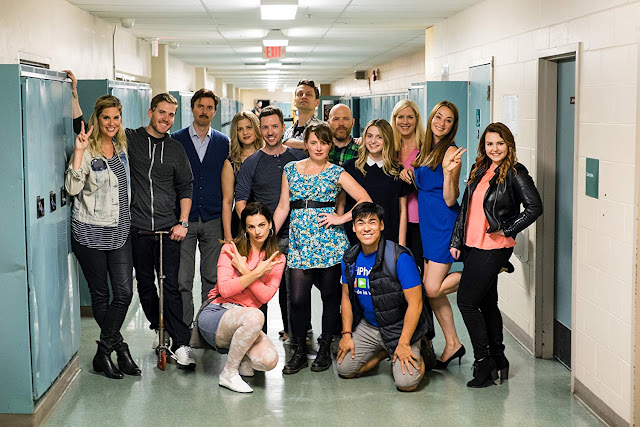 11 - 36 - That said, quite often half way through what seemed to be a good idea you realise you made a horrible mistake. A great idea is not always sustainable. What seemed easy to pull off to start turns out to be a really bad idea. Adam's plan, his life in general and his friendship with Greg all seem to be taking a nose dive because of his desperation to fix the one part of his life that wasn't 100% perfect.


37 - The question is can you change the past and if you can will it be worth it? The movie often references other 80's classic Back to the Future which makes perfect sense when you consider 37-Teen is a time travel movie without the time travel. Adam and his chums all go back to the 90's thanks to a shed load of Adam's cash and a relative splash of make believe, no flux capacitor required.

37-Teen is an extremely funny, heartfelt story with a message. Your enjoyment will be heightened if you are aware of the oeuvre of the like of Hughes but that knowledge is not a necessity, you may find that a couple of the references will fall flat. It will also resonate if you are of a certain age.

Speaking of age, I'll just leave you with this. I happen to know that the two leads in the movie are a fair bit older than 37, however you wouldn't know it to look at them. Movie magic or genetically inclined to being handsome devils? You decide.

37-Teen is available on iTunes, Google Play, Amazon and all other downloady places.