Impartiality is also a must, which is very hard to bring to a site such as this. So when it became time to produce a review of my own favourite Corner Gas episode I decided to call in a professional, a bit like The A-Team, but with less guns and better vocabulary skills. Someone to write the post for me who could add said impartiality. If I wrote the article it is possible that I would add levels of kissing up so high that the sickly sweet flavour of my writing could induce type two diabetes. So without further ado I will hand you over to our U.S. correspondent, Charles Culbertson.


In the interests of full disclosure, unbiased reporting and dignified reciprocity – oh, heck, who am I kidding? I'm writing this review of "Slow Pitch" because Ian Richards told me I could, after he so graciously wrote a review of my favorite CG episode, "Buzz Driver." There has (regretfully)  been no exorbitant exchange of currency for this review, nor were there (very many) physical threats involved. I was, I think, called a "jackass" at least twice, so I volunteered. Truly, "Slow Pitch" is one of my own top CG episodes, so it's a treat for me to be able to give it the old once-over. 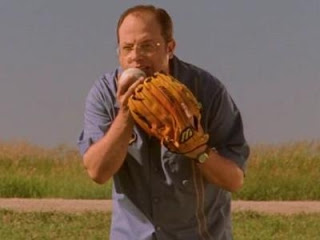 "Slow Pitch" was episode 17 in season 2, and it remains one of the reasons Corner Gas was such a smash hit in Canada. It has everything that made the show great: subtle and not-so-subtle humor, quirkiness, warmth and a compelling story line. While the softball-game ploy has been used countless times in television shows around the world, the writers of this episode – Brent Butt and Andrew Carr – managed to make it seem fresh. They were able to do that because of the incredible cast that populated Corner Gas. The eccentricities of Brent, Oscar and Emma, Wanda, Lacey, Hank, Davis, Karen, and a host of lesser players, were brilliantly melded into the story, giving it a vibrancy not many other ballgame-themed shows ever achieved. 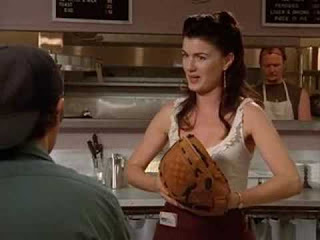 No spoilers here, but the episode centers on the annual Dog River softball game between the Corner Gas Guzzlers, led by Brent, and the Wild Ones, led by Wes. The payoff for the winner: free beer and nachos. The areas of conflict in this particular game are the possibility that the Guzzlers could get disqualified if 10th member Lacey doesn't make it to the game in time; a cooler full of beer that officers Davis and Karen must turn a blind eye to; Emma's uncharacteristic bombing out at bat; and Hank's glove, which becomes an entity unto itself. Of course there are sidebars to the story, such as the endless Harvesters meeting at the Ruby. 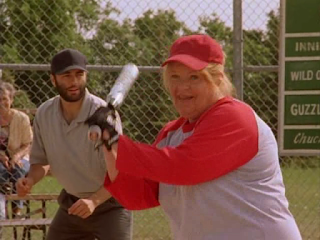 "It is a supremely silly episode and full of little blink-and-you-will-miss-them jokes," said a wise and omnipotently observant Ian. "For example, Hank is already rubbing his hand because Lacey slapped it for trying to take a cake, just before Brent gets slapped for doing the same thing; Davis breaking a window; Brent and Hank creating a one-sided argument with Wes; and Oscar's signals at the game. So much hilarity in one episode."


Ian's dead on the money. Thoughtful silliness abounds in "Slow Pitch," and it's a delight to watch. My own favorite small moments are Hank discussing with Lacey the merits of "Genuine Cowhide" versus just "Cowhide;" Oscar's torturous, Riverdance-like signals from third base; Hank's comment that "Where you are, you're always there;" and Brent naming his pitches "Slow Train to China," "Hammer of Thor" and "Fried Green Tornado" – even though all his pitches are exactly alike. 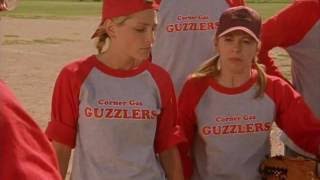 Because there are so many elements to this episode, each of the main characters receives roughly  equal "face time," as showbiz folks are fond of referring to it. That's not an easy thing to accomplish and still keep the interest going, but it works in "Slow Pitch," as it did in all the Corner Gas episodes. Again, the characters drive the action, and with this bunch at the wheel, it's a whale of a ride.


"Slow Pitch" is full of charm and laughs, and as is the case with nearly all Corner Gas episodes when the credits roll, it leaves the viewer smiling, shaking his/her head and muttering, "Why did they ever pull the plug on this show?"

...now back to Ian in England

Thank you Charles for you're insightful review which was by no means influenced by an  envelope marked "To Charles - Mum's the Word", stuffed full of a one dollar bill, left thoughtfully under a bin in a local bus depot.

If you would like to have your favourite Corner Gas episode reviewed please contact me at any of the addresses on our contact page. For your efforts you will receive a lovely certificate to frame and put on the mantle next to the picture of Uncle Bert holding his prize winning catch. Why Bert referred to Aunt Doris like that I will never know.

Now over to Tina for the weather.....